Today Donald J. Trump becomes the 45th President of the United States. To say I never thought this day would come is probably my greatest understatement ever. I was certain we’d never see this man sitting in the Oval Office, yet here we are.

The journey from that stage of denial to today’s acceptance of his inauguration has been a tough one for myself and millions of my fellow Americans. At times it’s felt like I was shoved in a car by people I don’t know or associate with and forced to travel an unfamiliar highway late at night. What’s worse, the car has no headlights, no brakes and to top it all off we’re not even certain where we’re all going. Hopefully we can keep our wits about us and not drive off into the ditch. If we all do our part, God willing we’ll arrive someplace safe and not as bad as we originally thought.

This past week I spent time taking down Christmas decorations and as I was packing up the boxes I caught myself thinking “I hope this isn’t the last time I get to do this.” I was stunned to realize I actually thought such a thing but I had. What if this reckless, unfit, unqualified, corrupt bully of a man starts a war and kills us all? Is that posssible? As depressing as it sounds, yes, it certainly is. And if he doesn’t get us, climate change almost certainly will.

By the time I came back in the house however I started thinking of ways I and others can help make sure these things didn’t happen. Be kind to strangers, help those in need, call my local leaders and make damn sure they know Trump doesn’t speak for me or my family. Teach kids and grandkids to be self-reliant, keep an open mind and be tolerant of others. If you see an injustice being committed, especially to a person of color, speak up. Learn a new skill or trade and do what you need to do to take care of yourself both physically and mentally. It’s up to all of us to resist and not become complacent. It’s going to be so difficult these next four years to not simply give in to the constant stream of bullshit but that’s what we have to do. I for one am ready to fight, I’m ready to do my part to steady the wheel.

As one of my favorite cinematic characters once said “The future is not set, there is no fate but what we make.” Like her, I want to face that highway with a sense of hope for the future, not despair. It won’t be easy, and there are bound to be casualties along the way but I’m confident we’ll get there in the end if we work together and stay true to ourselves. Come with us if you want to live, love who you want and be free. 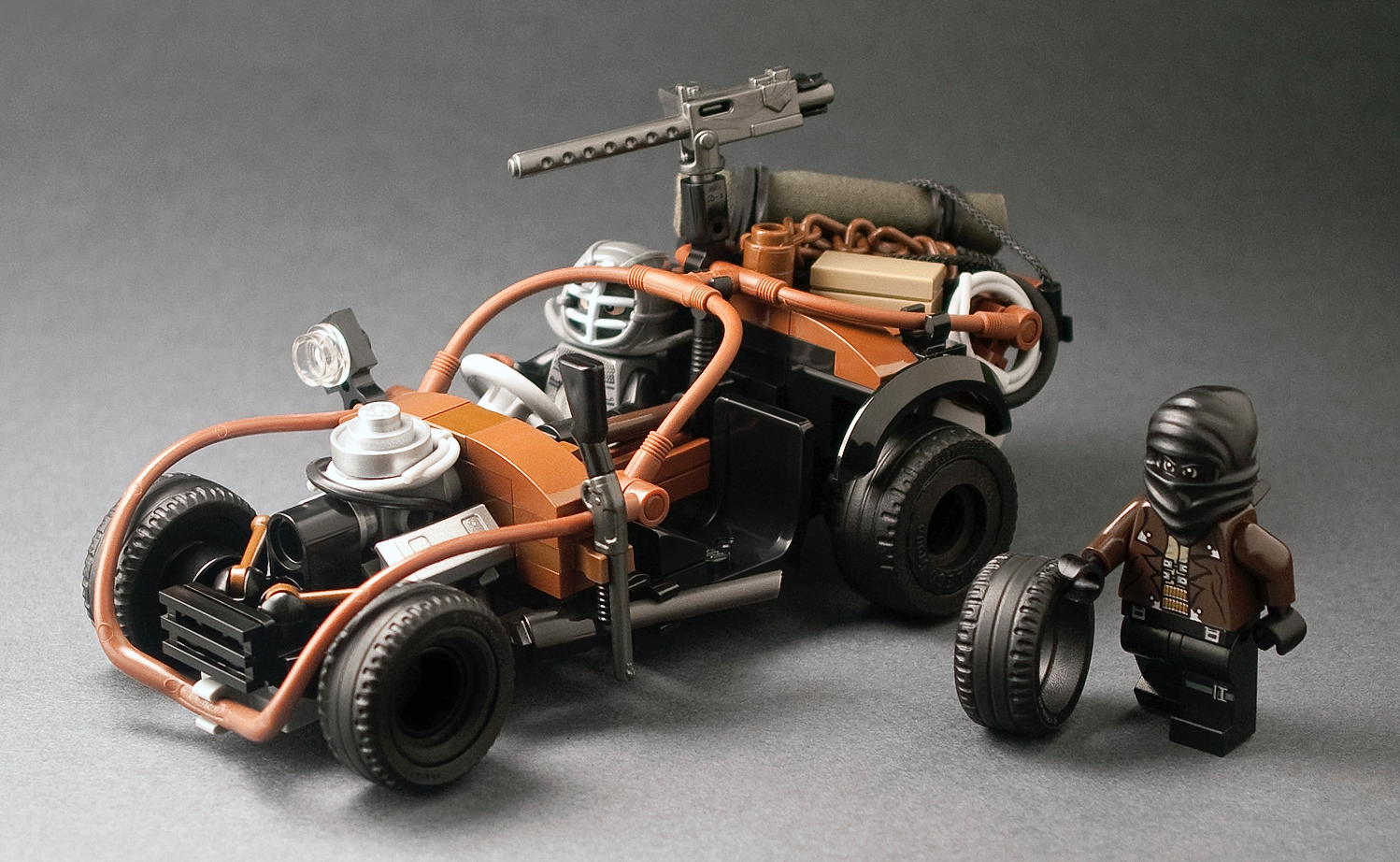 I love it when a movie, TV show or book takes hold in someone enough to inspire fan creations. I was skeptical when I heard all of the hype surrounding the new Mad Max film, but my fears were quickly buried in an awesome heap of twisted metal once I saw the film. A strange mix of classic action and modern, diverse storytelling, Fury Road really did live up to my expectations.

The film has inspired tons of art from fans from all corners of the globe and now comes these amazing LEGO roadsters from build master Calin (_tiler). I love every single bit of these builds especially the simple lines and bits of canvas and string used for the bedroll. Be sure to check out their Flickr page for even more amazing Mad Max vehicles.

These images take me right back to how I felt when I first saw the Kenner’s Landspeeder toy. I would spend hours in the sand playing with that thing until my mom would be forced to call me in for supper. It’s great how something so simple and fun can evoke the child in all of us. 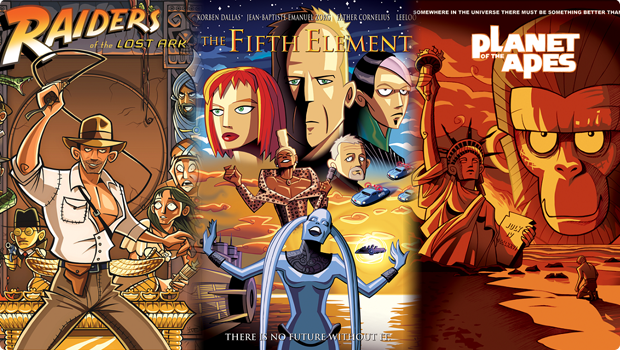 Ïve Bastrash, a Canadian-based illustrator has been busy pumping out stylish renditions of some of his favorite sci-fi, fantasy and action movie posters. The results are charming and bold and remind me a great deal of one of my all-time favorite artist’s work, Bruce Timm. Head on over to the post at DesignTaxi to see more, and then visit Bastrash’s Deviant Art page to see other work from this very talented artist. Well done sir, well done!

The fine folks over at IO9 take a moment to let us know today is the 25th anniversary of the release of The Adventures of Buckaroo Banzai Across the 8th Dimension. Released on August 15th, 1984 Buckaroo Banzai is one of those movies that you either love to death or hate with the passion of a 1,000 burning suns. I and many of my college friends fall firmly into the former category. Buckaroo was one of the dozen or so movies we would pop into the VCR in our dorm’s lounge on a regular basis. Other movies in this category included Remo Williams: The Adventure Begins, Vampire Hunter D and The Princess Bride.

When it was released, Buckaroo Banzai was met with mixed success and boastfully promised that Buckaroo would return in a sequel titled Buckaroo Banzai Against The World Crime League. Unfortunately the movie’s campy premise, confusing cast of characters and low budget special effects doomed the sequel from ever appearing. Never-the-less the film sticks in many fan’s hearts as a sci-fi favorite. For my part, Buckaroo has been the inspiration behind several icon sets and desktop pictures.

There has been much talk of reviving Buckaroo in recent years. Everything from a new TV series on the SyFy network to a re-imaging similar to what Battlestar Galactica received have all been thrown against the wall to see what sticks. Needless to say, so far, nothing has. This isn’t necessarily a bad thing though, because as any true fan will tell you, it just would wouldn’t be Buckaroo without the original cast. Hearing “Remember, no matter where you go, there you are.” coming from anyone but Peter Weller just wouldn’t cut it. So mo matter what may come, at least we can fire up the DVD player and put ourselves in New Jersey’s shoes to wonder “Why is there a watermelon there?” Why indeed.

So like millions of Americans, I went to see PIXAR & Disney’s latest animated film, WALL•E this weekend. For those of you living under a rock, the film tells the tale of a brave little robot who is left to clean up the Earth after mankind dumps so much trash that he can’t live here anymore. Adventure, romance and of course humor ensue for the tiny bot with a Johnny 5 complex.

Reviews from critics and the movie-going public have been overwhelmingly favorable, and it’s easy to see why. Behind the futuristic facade of WALL•E lies basically a love story between WALL•E himself and the angelic EVE. The story also cleverly taps into an topical issue that is sure to raise the ire of some of the more conservative audience members – environmentalism.

Back in August of 2007, I wrote a post about PIXAR’s advanced PR for the film, via the Buy n Large viral website. Buy n Large is the company responsible for the vast consumerism that ultimately makes the Earth uninhabitable to the human race in the film. The message in WALL•E is clear – if things keep going the way they’re going, we won’t have a planet left to live on. This moral imperative is one of the major plot points of the film, and I’m betting it won’t be very long until we see right-wingers railing against Disney and PIXAR for “green propaganda”.

I’m willing to bet that by no later than this Wednesday, Michelle Malkin, Bill O’Reilly, Neil Boortz or some other misguided blowhard will do their best to alter WALL•E’s portrayal as lovable protagonist to that of a mechanized propaganda bot intent on brainwashing your kids. Rest assured it will happen, and when it does, I’ll update this post with which offender was first to pull the trigger.

In the end, nothing these people can say will diminish the movie’s endearing success. WALL•E is nothing short of an animated masterpiece that has its heart and message in exactly the right place. There is plenty of emotion and humor to keep audience goers smiling and parents safely content. And if kids get interested in recycling or gardening, let’s just say it wouldn’t be the end of the world.

UPDATE: Here’s a tweet that illustrates what I’m talking about. It’s starting.

UPDATE II: DING! DING! We have a winner, or rather a big, fat ignorant loser… in the form of everybody’s favorite shill from CNN, Glenn Beck. Think Progress has more too boot. To quote Weird Al, “Man, I hate it when I’m right.”

I’m pleased to report that episode 008 of Sci-Fi Cast is now online and is truly one for the ages. Dave Caolo and I participate in the geek version of Fesivus and “air our grievances” with the Star Wars prequel films. We cover a wide range of important nerd-esqe topics such as GCI sets, the less than deadly Battle Droids, poor casting decisions and how a high school biology lesson managed to suck the life out of the Star Wars universe. This one’s our longest episode yet, clocking in at 47 minutes, so if you’re looking for the Cliff Notes version of this episode, simply skip forward to the 39′ minute mark to avoid all that tedious mucking about in hyperspace. If you love Star Wars however, tune in for the whole cast, I think Dave and I do a fairly good job of putting into words what was so frustrating about ep I-III. Don’t forget to post your own prequel pet peeves (or favorite bits) in the comments over at theSciFiCast.com! Next week we return you to our regularly scheduled program of BSG. See you then!