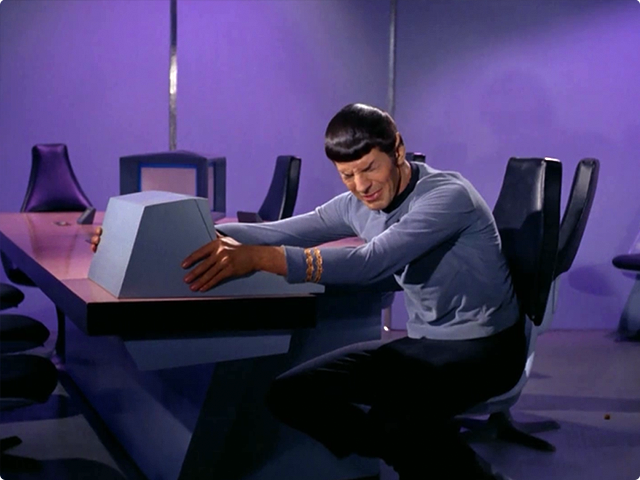 You were expecting Sulu with his rapier perhaps? When fans think of season one’s ‘The Naked Time’, the image that most likely comes to mind is indeed George Takei as Sulu in full Errol Flynn mode. For myself however, the episode is much better represented by the shot above where Spock struggles with his inner self after contracting the Psi 2000 virus. The story gave Leonard Nimoy the first notable opportunity in the series’ run for viewers to get a glimpse of the emotional struggles Spock faces as a half-vulcan, half-human being.

Spock stumbles into the briefing room and futilely attempts to get control of his emotions. Overcome with waves of sadness and anger, he clutches the computer, desperate to hold onto his logical, analytical side, both literally and figuratively. The sickness overcomes Spock until he witnesses how it has effected his friend and Captain, Jim Kirk. The amount of character development that goes on in this short scene is amazing and therefore earns a spot in my One Perfect Shot roster.

Next on the slate, two halves of Captain Kirk don’t necessarily make a whole in ‘The Enemy Within‘.