In an effort to underscore just how much the right fears Barack Obama, I’ve put together this helpful info graphic. Inspired by something Britt Whitmire said this morning on his radio show, I decided to check out the total number of entries for both Obama and McCain at Snopes.com, a non-partisan website that tracks urban legends and scam emails. They say animals that are cornered tend to go on the attack, so judging from what’s happening at Snopes, one could theorize conservatives are feeling “trapped” this election cycle.

Emails, rumors and media reports filled to the brim with misinformation about Obama have been circulating for months in an effort to spread fear, uncertainty and doubt about the Senator from Illinois. This might have worked in 2004 against John Kerry, but Obama is being proactive with sites like Fight The Smears and surrogates that counter media lies at every possible opportunity. It’s about time too because, like millions of progressives in this country, I’m tired of the Democrats running defense these last eight years. The recent flap over McCain’s multiple homes is just the sort of thing Karl Rove would unleash on Obama if he had the chance. Don’t believe me? The data at Snopes doesn’t lie. 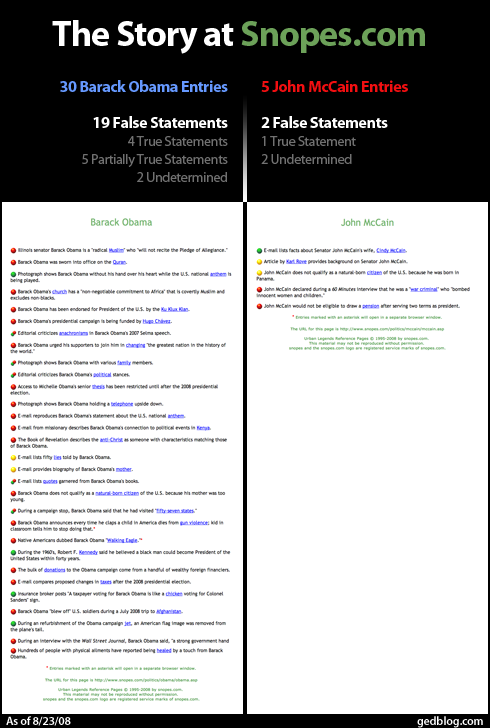