As I prepare for tonight’s penultimate episode of Game of Thrones, I’m reminded of this classic exchange.

I used to think everything related to Star Trek, but now-a-days I’m thinking it’s Princess Bride. Who knew?

Most days, being a developer on the App Store is a little like this:

Come on Apple, let us help you out and throw you the damned rope.

I and many other people are feeling a deep loss at the sad news that funny man and Oscar-winning dramatic actor, Robin Williams, has died at the age of 63. From my introduction to Robin as Mork from Ork on Happy Days to his break-out stand-up performance at the Metropolitan Opera in New York, I followed his career at every step of the way and enjoyed everything he appeared in. Some of my favorite Williams’ performances include Good Morning, Vietnam, his amazing voice over work as the Genie in Disney’s Aladdin, Dead Poet’s Society, Awakenings, Toys and The Birdcage. It pains me to say it but there are many films he’s appeared in that I’ve never seen. With his passing I think I’ll have to correct that oversight and re-discover some of Robin’s incredible work anew.

There are only a few celebrities & personal heroes who, when they pass, I will truly grieve for. Robin Williams is one such person. He brought so much happiness, laughter and light into our lives it’s difficult to imagine a world without him. Personally, I’ll be focusing on all those wonderful moments and characters, all the belly-laughs and chuckles and even the tears he conjured as he entertained and transfixed us. He was a bright star in the lives of those friends and fans who loved him and he will be dearly missed.

SPOILER WARNING: If you’ve not seen all three seasons of The Walking Dead, this video may contain some minor spoilers for you. Watch at your own risk.

I’ve enjoyed the Bad Lip Reading parody videos for some time, but this new one based on AMC’s The Walking Dead is by far the best yet. It’s amazingly well done, especially the voice acting which makes it even funnier. If you love The Walking Dead, you’re in for a treat. The Governor’s finale alone is worth the price of admission.

I’ve been seeing quite a few of these “Best Movie Lines” videos on YouTube and so I thought I would take a shot at making my own. It took some work to grab all of the clips, but the result was worth it. Editing this short ode to silver screen silliness was really fun. Next up, my favorite dramatic lines. Enjoy!

To be fair to actor Tom Wilson, who played the infamous bully Biff from the Back to the Future films, I’d probably ask him all of these questions too. That’s why I’m so glad I discovered this gem of a clip where Tom puts all of the answers to song. The result is something that should somehow be worked into the next season of Big Bang Theory. Enjoy!

To say that Andy Richter Controls the Universe is one of my favorite shows is an understatement. The short-lived series ran for only 19 episodes and, like so many others before it, was doomed by an early FOX cancellation. Although hailed by critics as one of the funniest shows of the 2002-2003 season, the quirky sitcom starring Andy Richter, Paget Brewster and James Patrick Stuart never made it out of the starting gate. Now, after almost seven years in distribution limbo, my favorite sitcom is finally coming to DVD.

I fell in love with ARCTU some time after it’s initial broadcast and scrounged up every single episode I could find on “the tubes”. Now TVShowsOnDVD.com reports that Andy Richter and his office pals will be coming to a DVD player near you on March 24th. No word yet on pricing or DVD extras, but that doesn’t matter, this show’s proof is in the pudding. Corey and I are genuine ARCTU fanatics and can quote more lines of dialog than we care to admit. There are so many awesome episodes it’s difficult to pick a favorite, but if you twisted my arm hard enough Richter’s reunion with Conan O’Brien in Crazy in Rio would be at the top of the list.

If you’ve never had the opportunity to check out Andy Richter Controls the Universe, pick up a copy on sale this March. With an unforgettable blend of snarky writing and impeccable casting, ARCTU is one purchase you won’t regret. 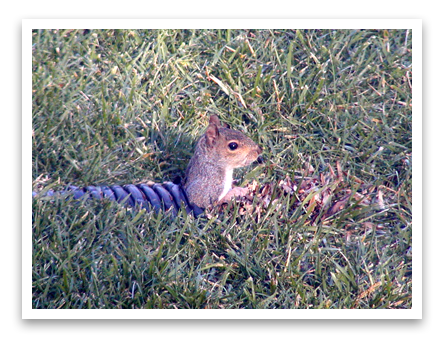 Caught this guy coming out of my front porch drain pipe the other day. I swear on the Internet this image hasn’t been altered in any way. I saw him going in and out of the pipe which sits on my front lawn and I grabbed my camera. On one of his exits he seemed to know I was watching and posed for me. At least now I know why my gutters are all backed up…

UPDATE: I submitted the little guy to icanhascheezburger.com. Head on over and vote for him before he gets his friends to clog up your drains too!