While browsing the Vimeo channel on Apple TV, I came across a wonderful fan film about one of my all-time favorite movies – Raiders of the Lost Ark. Created over a period of 8 months by filmmaker Jamie Benning, Raiding the Lost Ark combines radio and TV interviews, script and storyboard excerpts, trivia and more to give Raiders fans a deep insight into the film. When I pressed play I thought I would watch for a few minutes to see if I learned anything new. A few minutes turned into 30 minutes which turned into an hour and by the time I was done I had watched the entire thing, it’s just that good.

I don’t want to spoil the incredible content that Jamie has gone to great pains to produce, but one nugget stands out that I just have to share. Amazingly enough, the entire airstrip sequence where Indy plans to steal the flying wing and escape with Marion & the Ark was entirely improvised over the course of a week. The shooting script for Raiders had no details what-so-ever about this action packed sequence and so Steven Spielberg worked closely with Harrison Ford and improvised everything. Through interviews presented by Benning, we learn how this sequence came together and how much Spielberg loved filming it. This is just one of the golden, gelaming treasures unearthed in Raiding the Lost Ark. I highly recommend it.

Back in January I wrote about the release of one of my all-time favorite TV shows on DVD. After almost 7 years, Andy Richter Controls the Universe was released on March 24th and thanks to Amazon.com I had my copy on the 25th.

All in all, CBS has done a pretty good job with the transfer of the show to DVD. The box set is formatted for 16:9 televisions and the decisions about where to crop the image for widescreen make it seem like the show was originally shot in HD, which it evidently was (my bad). The picture is clear and selected episodes even come with audio commentary from Richter himself. If you’re a fan of the show, don’t miss these as well as the making-of features that are at the end of the third disk.

While it’s indeed awesome to finally have ARCTU on DVD, there are a few upsetting things that Andy fans will immediately notice. The first problem relates to the order of the episodes. While the DVD appears to list the show’s episodes in broadcast order, it would have made much more sense to list them in the order they were produced. It’s never made sense that the show’s 2nd episode (aptly entitled “Second Episode”) was aired 4th, especially since it immediately follows the events in the pilot. New viewers will inevitably be confused.

Perhaps worse are the numerous changes in the show’s soundtrack that have been made. It’s impossible to tell if these edits were done because CBS couldn’t or simply didn’t want to secure the rights for the original music, but either way they’re disappointing. Here are just four examples from two episodes of the changes that have been made.

Some of the changes I can deal with, but others are just bad. The “pseudo Sting” cover when Andy meets Wendy in his office is one of the worst, but the loss of the clip from The Sound of Music in “Grief Counselor” just plain makes me sad. I always got a chuckle out of Andy & Wendy kissing to the cooing sounds of Austria’s heartland and now it’s gone. I imagine this change was made because 20th Century Fox owns The Sound of Music and they didn’t feel like negotiating proper rights. Still, I’m a firm believer in the credo “If you’re going to do something, do it right”.

Overall this is a welcome, and long overdue release of one of the most underrated TV shows ever. If you’re a fan of Andy Richter, this set is definitely worth picking up. The image quality and formatting, as well as the DVD extras help make up for the sub-par treatment the soundtrack received. Check it out! 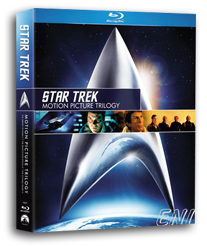 In their seemingly never-ending mission to get fans to buy more stuff, Paramount will soon be releasing a new blu ray box set aimed right at Trekkers. Although the ‘Star Trek Motion Picture Trilogy’ does not contain Star Trek: The Motion Picture, as the name would seem to suggest, it does contain re-mastered versions of The Wrath of Kahn, The Search for Spock and The Voyage Home in glorious HD.

According to Amazon.com the box set will be released May 12th, will retail around $50 and come complete with loads of extras. A quick glance at the product specs reveal commentary by William Shatner, Leonard Nimoy, Nicholas Meyer, Ronald Moore (of BSG fame) and many others as well as stacks of shorts, trailers and other goodies. It’s difficult to say if these new high-def versions are worth enough to replace any older copies you may have on DVD, but I suspect that given the amount of bang for the buck Paramount’s packing, updating your collection just might be the logical thing to do.

Back in March I wrote about the latest direct to DVD feature for Futurama, The Beast With A Billion Backs and said I couldn’t wait to see it. My how time flies! Beast came out last week and unlike Bender’s Big Score, this time Fry and gang didn’t disappoint. Dave Caolo and I had a literal ball researching this week’s episode of the Sci-Fi Cast as we watched Beast and then got together for an auditory Futurama fan fest. We cover the new film as well as our favorite moments from the TV series with a couple of surprises thrown in for good measure. If you love Futurama, then don’t miss Beast With A Billion Backs, and once you’ve watched it, be sure to tune into episode 12 of the Sci-Fi Cast. You’ll neither rue, nor lament it!