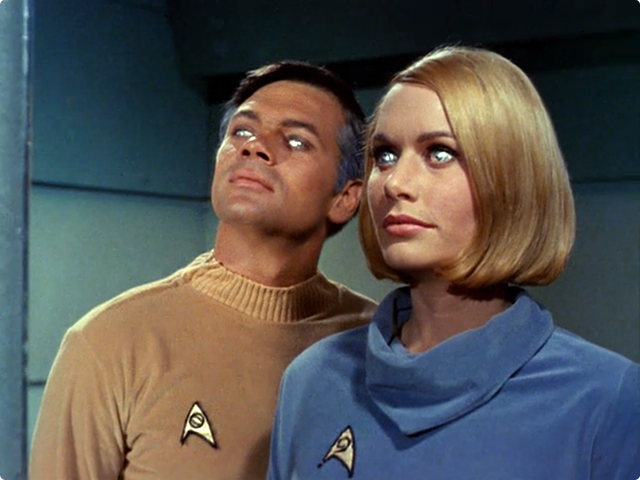 Originally filmed as the historic second pilot to Star Trek, ‘Where No Man Has Gone Before‘ is yet another story of humans acquiring god-like abilities. The episode re-used much of the production design from the original pilot of ‘The Cage’ including sets, costumes and props. DeForrest Kelly and Nichelle Nichols had not yet been cast as Dr. McCoy and Lt. Uhura and the show didn’t have its familiar opening narration, the last line of which comes from the title of this episode. Roddenberry pitched several scripts to NBC as the second pilot including ‘The Omega Glory’ and ‘Mudd’s Women’. In the end it was ‘Where No Man Has Gone Before’ that caught the studio’s eye, probably due in-part to the knock-down fist fight between Kirk and Mitchell Gene specifically wrote to help sell the show as his “Wagon Train to the stars“.

Our perfect shot features Gary Lockwood as Lt. Cmdr. Gary Mitchell and Sally Kellerman as Dr. Elizabeth Dehner staring at their eerie reflections as they realize they’ve evolved beyond normal humans. The other-worldly effect of the glowing eyes was achieved by sandwiching wrinkled tinfoil between two scleral contact lenses which covered the entire eye of the actors. Lockwood quickly discovered how extremely uncomfortable the lenses were and found he could only see if he tilted his head back, allowing him to peer out the tiny eye slits in the foil. To his credit, the actor used this to enhance his performance and gave Mitchell an increasingly arrogant gaze as his mutation eventually overtook him. For a time, fans speculated that Mitchell’s character might be the villain in the second J.J. Abrams’ Star Trek feature film Star Trek Into Darkness, but we all know who that turned out to be instead. 🙂

Next on the slate, then Enterprise crew gets freaky-deaky in ‘The Naked Time‘.