Tricky Tracks is a stunningly beautiful and deceptively simple web-based game by Maxomedia Design Agency. If you’ve ever played with toy train sets, love building things out of LEGO bricks, or just appreciate beautiful game design, Tricky Tracks is for you. Sponsored by the SBB Swiss Federal Railway, the game’s 15 levels are broken up into groups or “boxes” of tracks, each set on gorgeous, 3D wedges of the Swiss countryside.

The object of the game is simple – Get your passenger train from station A to station B. You do this by simply pulling a pinball-style plunger in the upper-right corner of the browser window. Pull with too little force and your train won’t reach the other station. Pull too hard and your train along with all its passengers will fly right off the tracks in a spectacular wreck (yes, I’ve done this intentionally just to see what would happen). Points are awarded based on how many attempts it takes to complete a level, total time spent and special bonuses in the form of achievements that you rack up along the way.

As you progress through the beautifully rendered levels, you’ll encounter ever more difficult challenges such as railroad switches, car crossings, tunnels and steep inclines. Both the timing and power of your shot has to be perfect if your tiny train is to make it safely from one side of the level to the other. The game play is highly addictive, but for my money, the best part of Tricky Tracks are the visuals. From the moment the game loads, you know you are in for a special experience. The user interface is classic Swiss design – simple and elegant. The camera controls are easy to master and give you a soaring view of the tiny hills, valleys and towns that you’ll be visiting while you play. 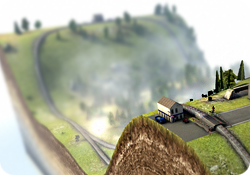 I’m told that many of the locations used in the game are based on actual places in Switzerland, which after playing, just makes me want to ride the Swiss Railway even more. The scenes are gorgeous and the extremely narrow depth of focus is reminiscent of tilt-shift photography which enhances the illusion of playing with toy trains. Some levels like Genhimmelen (seen left) seem impossibly difficult, but with enough persistence and a little luck, you’ll be pulling into stations perched high atop mountain cliffs and braving pesky downtown traffic jams like a real pro.

Tricky Tracks makes use of the Unity 3D Web Player plug-in so you’ll need to download and install it for your favorite web browser before you can play. I’m not sure of the minimum system requirements, but I ran Tricky Tracks on my Core i7 iMac with 8Gb of RAM and the game played fine, at least until the last few levels. The complexity of the maps in the 3rd box of levels seemed to make camera rotation a bit jerky, but it was still very playable.

Perhaps the very best part of this wonderful effort is that Tricky Tracks is absolutely free to play. All of the initial 15 levels are included on the game’s website with the promise of a new box of 5 more “coming soon”. It took me about 2 hours to play through every level but it could probably be done in less time. Admittedly, I spent a much of my time enraptured with the look of each level. From the bright, overwhelming city lights of Knetikon (seen right) to the miniature majesty of Chateau Obersbach and the picturesque sea-side town of Sunnikon, the visual wonders in Tricky Tracks delight the eye and bring out the kid in all of us. I can’t wait to see what other challenges the game’s designers have in store, but in the meantime steam on over and give Tricky Tracks a go today. You won’t be disappointed.