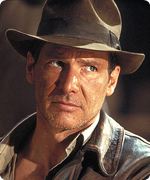 After what seemed like 1,000 years buried in the Well of Souls, Steven Spielberg and George Lucas have finally announced the release of all four Indiana Jones movies on HD blu-ray. Little is known at this point about the release other than it’s coming this fall and promises to contain interviews with the creators and stars as part of its extras. You can pre-order the set now on Amazon.

I don’t get too excited about the release of movies on physical media these days, but hopefully the Indy collection will sport digital copies, and if so I’ll probably pick it up. I’d like to say that the release of the set in HD means that we can look forward to also being able to buy it on iTunes, but as we all know that’s not necessarily the case. If you’re a fan of Indiana Jones, be sure to head over to YouTube and view the collection trailer in HD today.