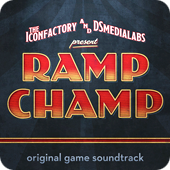 For designers and artists, the chance to collaborate with others who share your passion for creation is a wonderful event. Ideas feed off of each other and lead to new connections which can both surprise and delight. Such was the case while scoring Ramp Champ, the Iconfactory’s & DS Media Labs’ ode to the classic games of Skee-Ball and pinball for the iPhone. I’m pleased to report the game’s soundtrack was recently released on iTunes, something none of us at the factory could have dreamt of happening.

When we originally designed the game’s ramps, we knew we wanted the quality of the music to match the fidelity of the visual elements. Having a generic track repeat itself across multiple ramps, from outer space to under water, wasn’t going to be fun for the player. During the initial production phase of Ramp Champ, composer Noe Ruiz took the lead and created many of the tracks for the default levels such as Clown Town, Breakwater Bay and Space Swarm. Noe has a wonderful ear for rhythm and was able to incorporate these into the widely varied themes with ease. Of all the tracks he originally produced for Ramp Champ, Space Swarm (along with it’s dance and techno re-mixes) has to be my favorite of the bunch. Space Swarm is filled with old-school retro arcade sound effects that play perfectly into the look and feel of the ramp, helping to evoke the feel of a classic 80’s arcade game.

Atomicon’s David Weiner took up where Noe left off and came on board to help us produce the music for two of the game’s add-on packs. The Challenge Pack featured Molar Madness and Happy Place, both of which required a decidedly twisted approach when it came to the score. David’s work on Molar Madness is nothing short of brilliant. The samba-like piece he created for the ramp is both catchy and just the sort of thing you’d hear coming from the speakers of a dentist’s waiting room. Molar Madness is, without a doubt, one of my favorite pieces in all of Ramp Champ. Happy Place somehow managed to take the absurd notion of dolphins and unicorns floating in the sky and give them life. The track is zippy and light, but has decidedly dark undertones that foreshadows ominous events the player encounters within the level.

When it came time to write the music for our special Halloween add-on pack, David once again stepped up and gave us two wonderfully spooky tracks. When I approached him about Trick or Treat, I knew I wanted music that sounded both eerie as well as innocent. The ramp features children as they roam a neighborhood for candy on Halloween night. As we talked through our ideas, one of our inspirations was Vince Guaraldi’s classic Great Pumpkin Waltz from “It’s the Great Pumpkin Charlie Brown”. David’s final piece has this jazzy feel as well as elements that remind me of the creepy TV cult hit Twin Peaks, which worked out wonderfully. The other piece in the Halloween Pack, Grave Danger, draws obvious inspiration from Disney’s classic Haunted Mansion with all kinds of over the top scary sound effects like thunder, ghosts and werewolves.

For our 3rd release, David Weiner was already busy scoring the Challenge Pack as well as our other iPhone title, Pickin’ Time, and so we turned to composer Mike Weiser. Mike has created music for many iPhone games including Stick Wars and Tower Land and I was fortunate to be able to work with him on Plunderin’ Pirates and Star Struck. Mike’s score for Plunderin’ Pirates, inspired by Disney’s famous Pirates of the Caribbean ride, is one of the funnest pieces in the game and does a great job of evoking the high seas thanks to the use of instruments like the accordion and steel drums. The sound effects I produced for the ramp added to the overall feel and makes for what many players have called their favorite level in the game.

On Star Struck, both Mike and I decided to create something that reminded the player of space exploration, like you’d hear sitting in a planetarium. The “computerish” tones that come in at the start and end of the track were originally an ode from one of my favorite films ever, The Hitchhiker’s Guide to the Galaxy, although Mike masterfully made them his own in Star Struck. The album version of Star Struck that appears on the soundtrack is a specially composed version of the game’s track and is my favorite piece in all of Ramp Champ. You’ll be able to catch more of Mike’s work in the Iconfactory’s next software title, coming to the iPhone in the second quarter of 2010.

Collaborating with Noe, David and Mike on the music for Ramp Champ was, without a doubt, one of the most rewarding things I’ve done during my time at the Iconfactory. The talent these guys posses to take one’s creations and run with them musically is nothing short of astounding. Their work made our efforts that much better and for that, we are all grateful. With Atomicon’s help, we’re proud to finally be able to bring you the complete original soundtrack. I really encourage you to check it out and hopefully you’ll enjoy listening to it as much as we had bringing it to you.