The much anticipated Vice Presidential debate is now past us and I have to say I’m relieved. Relieved because quite frankly Sarah Palin has been an unknown quantity up to this point, but no longer. Last night she proved to me, and millions of Americans, that she really isn’t ready to be VP.

I give her major props for actually putting in a credible performance in last night’s debate. Stylistically she was friendly, approachable and down to earth. Unlike McCain with Obama, Palin looked Biden in the eye, and gave him credit for his positions on several occasions. But as the debate wore on, it was clear Palin was speaking from wrote. She didn’t answer the questions put to her, she mispronounced critical names and couldn’t keep up with Biden on important topics like nuclear proliferation and the economy.

The people this morning that are telling you Sarah won the debate are the same ones who went into the event white knuckled. They were scared beyond belief that the “Katie Couric” Palin would show up. You know, the one that couldn’t form complete thoughts, couldn’t name one periodical she’s read and didn’t know any Supreme Court decisions beyond Roe v Wade. So expectations were sufficiently lowered that supporters now feel confident saying Palin “mopped the floor” with Biden. It simply isn’t so, and in fact, just the opposite happened.

• Calling Afghanistan’s commander McKiernan “General McClellan” repeatedly and then lying about what he said on how an Iraqi surge “won’t work” in Afghanistan.

• Wanting to give the Vice President even “more power” in the US Senate. Biden killed her on this particular question. Palin’s surrogates disagreed with her take. The answer Biden gave was frank and reassuring. Palin’s reinforced the Bush policy of the Unitary Executive.

• Misunderstanding and then glossing over questions about a nuclear Iran to get to prepared answers to her own questions on a completely different subject.

• Over-use of “maverick”. She said it like 5 times in the last 15 minutes, until Biden had simply enough.

• Her rambling, incoherent answer on climate change. She clearly doesn’t understand or won’t admit the problem.

• She decries the media “filter” and wants to answer more of American’s questions directly but won’t agree to a general press conference. What’s up with that?

If the first and only Vice Presidential debate had been purely about style over substance then yes, Palin might have won. Americans however, were looking for cues to reassure them that Palin deserves the position that John McCain awarded her. They were not simply watching to see Wasilla Sarah’s folksy mannerism, “gosh darn-its” and winks to the camera. They came to learn if Palin had the stuff to take over as leader of the free world should something happen to a 72 year old man with a history of health problems. They didn’t get what they wanted.

With the eagerly anticipated Vice Presidential debate between Alaska Govenor Sarah Palin and Senator Joe Biden, I thought now would be a good time for Sarah Palin Bingo. Although Sarah came on like gangbusters, lately her star has been falling. From the get-go she has lied about her record on the “bridge to nowhere”, Alaska’s energy contribution to the United States, her position on climate change and a whole host of other subjects. And although she’s conducted only a handful of interviews, her answers have made conservatives increasingly cringe.

Given all this and the fact that a growing number of right-wing strategists have said she should resign from McCain’s campaign, I thought it would be fun to keep track of the items sure to pop up during the debate on October 2nd. You can download and print out the PDF version of Palin VP Bingo so you can play along at home, or just check the Palin Bingo Page following the debate to see how we did.

NOTE: If for some strange reason the VP debate gets cancelled, it’s an instant Bingo. Now go download and have fun! 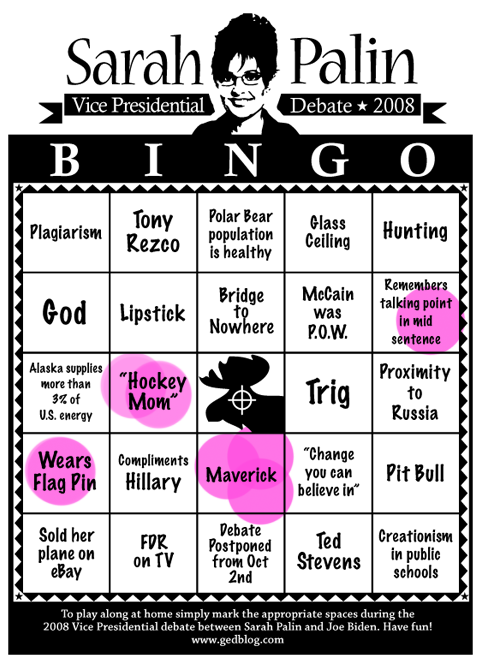 UPDATE: Well the debate is now one for the history books (thank goodness). I’m sorry to say we didn’t manage to call a Bingo! but it was fun none-the-less. If every space on the board had been filled with “maverick” then we all would have easily won. Sarah seemed to mention it ALOT in the last half of the event, especially in the closing minutes. And while she held her ground and didn’t provide the train wreck that I think so many on the left were hoping for, I think it’s pretty clear she doesn’t have the stuff to be one heart beat away from the Presidency. She didn’t answer questions, kept falling back on talking points, repeatedly mispronounced names and relied too heavily on “folksy” sayings.

Biden for his part seemed off-stride for the first half, but picked up steam in the end. He didn’t put his foot in his mouth as I expected he would (which was great) and gave more solid answers to a number of questions than Palin did. In the end, I don’t think this debate changed much, and after the right’s relief that Sarah didn’t screw up wears off, I think people will realize how little she actually said.