I’ve never actually done a video walkthrough of a mobile game before so this is new territory for me. As such, this review of the fun, turn-based iOS game Super Tribes is a bit longer than it probably should be but I’m still learning so go easy on me! My friend @Bigzaphod turned me onto Super Tribes and I’ve been playing it on and off for about a week. It’s really fun, light and doesn’t suck a huge amount of time which is perfect.

The best part about Super Tribes is that the game length is fixed to 30 individual turns which means a typical game can last anywhere from 20 minutes to about an hour and that’s it. You play against the AI, not other people or friends. Depending on your style of gaming this may be a plus or minus to you, but I personally enjoy it. There’s tons of stuff I didn’t cover in the walkthrough but what I do cover should be enough to get you up and exploring the flat, grid-shaped world of Super Tribes in no time.

The game is free to play in the App Store, but if you do try it and like it, I beg you to purchase at least one of the in-app tribe packs to help support the developer. Games of this quality take thousands of hours to design, produce, test and deploy and we want them to continue making them, they need to eat. That’s all I’m saying. Enjoy! 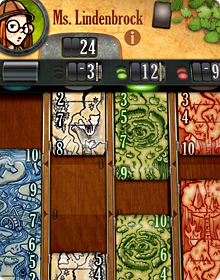 Lost Cities is a new game for iPhone from TheCodingMonkeys, publishers of the hugely popular Carcassonne. Based on the award winning card game by Reiner Knizia, Lost Cities takes elements of solitaire and combines them with vibes of Uno and Go Fish into a compelling game for two people or a single player vs any one of four AI opponents.

The game is easy to learn (I won’t go into the full rules here) thanks to the wonderful spoken in-game tutorials, but the basic object is to score points by playing cards of increasing value in any one of five, colored channels. Whichever player has the most points when all the cards from the draw pile have been played, wins. Since the Iconfactory did much of the graphical work for Lost Cities, I was generously given early access to the pre-release and have been playing a great deal this past week. I’ve learned a lot in that time and I wanted to share some of the insights I’ve had with would-be challengers.

Practice Against the AI

It may seem straight forward but playing the various computer opponents is a great way to get a feel for Lost Cities. Playing the AI means the game proceeds quickly since you don’t have to wait for a human friend to move. Getting into a rhythm in LC really helps you to understand how points are scored, cards are held or discarded and what to watch for.

The game continues only as long as there are cards to draw so keep a close eye on the number of cards left in the pile in the lower right of the interface. When that number reaches zero, the game is over so it’s important to know how many turns are left. Don’t wait until the last few turns to play your big cards if you can help it. Also, remember that the number of turns is just about one half of the number of cards left in the deck. It’s easy to look at 18 on the deck and think you have that many turns left, but you really don’t, you have approximately 9!

Unless you’re trying to make a run and score 8+ cards in a channel, you might want to start a channel with a 4 or even a 5. Low cards don’t yield many points anyway and probably won’t make a huge difference in the final outcome. This isn’t always the case of course, but games can easily be won by just playing the higher number cards alone.

Remember to Look Up

It’s easy to get so focused on what cards you have in your own hand that you forget to pay attention to what your opponent is doing. You’re not the only one at the table who has a strategy! Don’t forget to pay attention to what cards she is pulling from the discard piles or what color channels they seem to be favoring. You may be holding some great cards, but always remember Lost Cities isn’t just about scoring your own points, but also trying to block your opponent’s as well.

Don’t forget that you can re-draw from the discard pile if a card you previously got rid of is now needed. This can come in quite handy when cards of certain colors start to present themselves. Also, listen for the audio cues in the game like the little “tink” sound that lets you know a channel has just crossed the boundary from negative to positive point totals. Lastly, when playing the AI, don’t forget you can pause at any time and take a break. Maybe a refreshing drink or walk around the block will clear your head and help you crush Ms. Lindenbrock.

I love games like Carcassonne and Lost Cities because they combine elements of skill and luck in fun and engaging ways. They are also played at your own pace which is wonderful, especially in the age of first-person shooters and nerve-wracking puzzlers. TheCodingMonkeys have gone above and beyond to make Lost Cities both addictive and fun to play. It takes all of the best elements of Reiner Knizia’s original card game and adds wonderful features like automatic score keeping, tough AI opponents, beautifully rich graphics and and soundtrack that feels like it belongs in the cinema instead of a game. If you enjoy turn-based strategy or card games, I urge you to check out Lost Cities for the iPhone today. Enjoy!