I recently turned in my venerable Ford C-MAX energi and leased a brand new 2018 Nissan Leaf EV. I test drove the Leaf in addition to the Chevy Bolt and ultimately went with the Leaf due to its lower cost and the fact that it wasn’t a GM brand car. I’ve wanted an all-electric vehicle for years and now I’ve finally taken the plunge. So far I’ve been very happy with how the Leaf has performed overall and I wanted to take just a few minutes and highlight my initial impressions about the car after my first three days owning it.

I’ll make more of these videos as I form opinions on other aspects of the car, but for now I hope you enjoy this brief glimpse into the Nissan Leaf. 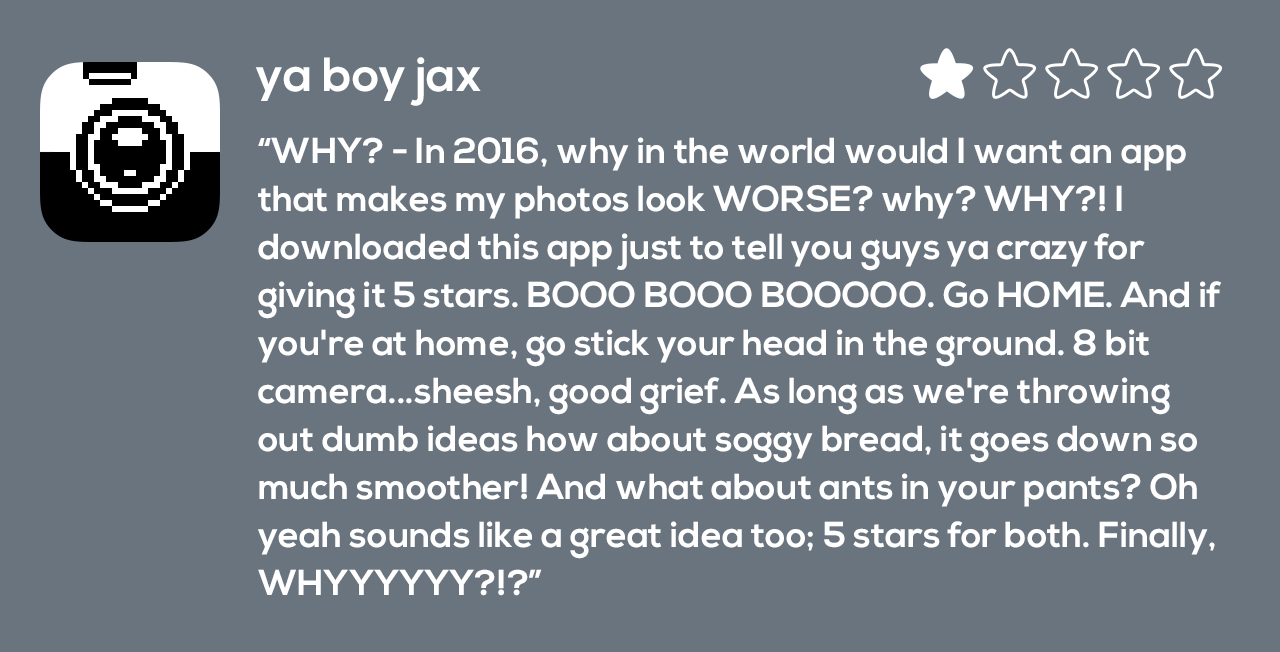 I and everyone at the Iconfactory are grateful so many people have been enjoying our little photographic throwback to the 1990′s with our recent release of BitCam. For those who remember the era it’s a nostalgia trip that brings bittersweet memories of straining modems and ear-piercing dot-matrix printers flooding right back. Millennials are not old enough to understand this however. To many of them, a dot-matrix printer is the tool that was used to print the flower patterns on the out house toilet paper back before there was indoor plumbing and colors hadn’t been invented yet.

Someday about 20 or 30 years from now, ya boy jax may well pine for the days when images were taken on a physical device instead of inside his eyeball. A time when talking with his friends meant tapping on a glass-covered screen to launch an archaic app like Snapchat instead of projecting a hologram of himself from his floaty chair onto whatever the internet eventually becomes. On that glorious day, I will push back in my recliner at the old folks home and smile the smile of kings.

I’ve never actually done a video walkthrough of a mobile game before so this is new territory for me. As such, this review of the fun, turn-based iOS game Super Tribes is a bit longer than it probably should be but I’m still learning so go easy on me! My friend @Bigzaphod turned me onto Super Tribes and I’ve been playing it on and off for about a week. It’s really fun, light and doesn’t suck a huge amount of time which is perfect.

The best part about Super Tribes is that the game length is fixed to 30 individual turns which means a typical game can last anywhere from 20 minutes to about an hour and that’s it. You play against the AI, not other people or friends. Depending on your style of gaming this may be a plus or minus to you, but I personally enjoy it. There’s tons of stuff I didn’t cover in the walkthrough but what I do cover should be enough to get you up and exploring the flat, grid-shaped world of Super Tribes in no time.

The game is free to play in the App Store, but if you do try it and like it, I beg you to purchase at least one of the in-app tribe packs to help support the developer. Games of this quality take thousands of hours to design, produce, test and deploy and we want them to continue making them, they need to eat. That’s all I’m saying. Enjoy!

Unless you’ve been living on the far side of the island for the past 3 months, you’ve probably heard of the iPad. You’ve probably already read more than your fair share of reviews of the device and what to expect from Steve’s latest magic marvel. Two of my favorite reviews so far are Jason Snell’s wonderfully complete write up as well as Sean Blanc’s take on the iPad. However, rather than pile on my own full review I thought I’d go with the “less is more” approach. Here, in no particular order, are my favorite and least favorite things about the iPad. You’re milage may vary.

Bad – The smudges. This thing shows fingerprints like a poor man’s crime scene.

Good – Speed. Holy crap this thing is fast. Apps launch, Safari scrolls and zooms, home screens load all tremendously fast. If you own an iPad and yours isn’t blazingly fast, you’ve either jailbroken it or offended it in some way. This thing flies.

Bad – The weight. It weighs about .5 – .75 more lbs than I would like. It’s not a huge deal, but holding it in one hand will quickly give you a workout. This is undoubtedly the handiwork of the super-long battery life which helps me deal, but I hope iPad 2.0 weighs less.

Good – Did I mention the battery life? It’s like crazy nutty awesome. I sat with my iPad on last night for about an hour using Twitterrific and Safari and went from 100% to about 97% battery. The iPad is doing some crazy ass power management.

Good – iBooks. The application is beautiful, thoughtfully designed and a joy to use. Almost makes me want to read more. Almost.

Good – Blue tooth keyboard pairing. This to me, is the killer feature. Once paired with my Apple wireless bluetooth keyboard my iPad effortlessly became a mini Twitter station next to my iMac. The keyboard can wake the iPad from sleep without the need to unlock and the function keys even control the iPad’s brightness, volume and media controls (play, ff, pause, rewind).

Good – Apps. There are tons of great apps out there for the iPad. In no particular order, my favorite apps so far include Articles, Things, Epicurious, At Bat 2010, Deliveries, Instapaper and my favorite of course is Twitterrific.

Holding and using the iPad makes all the difference in the world. Pictures, even video doesn’t do the device justice. It feels natural to manipulate and beats the hell out of a laptop for casual surfing, tweeting and replying to email. In the game department, the iPad will give all other mobile gaming platforms a serious run for their money. Watching movies & TV shows is light years better than watching them on my iPhone.

Overall the iPad is yet another feather in Steve Jobs’ and Apple’s cap. Even if I didn’t develop apps for a living, I’d still buy one for myself because its just so darned fun and effortless to use. The iPad is certainly a game changer and if nothing else has proven that despite Microsoft’s failed efforts to the contrary, tablet computing can be successful. Check it out.

Back in July I wrote about a new pocket video recorder that was due out from Kodak, the Zi6 HD camera. Kodak was positioning the device as a “Flip Killer” and people started tweeting and talking about it like crazy. When it was released, a bunch of the people I follow on Twitter bought the Zi6, but for one reason or another were unsatisfied and returned it, including my friend Dan Benjamin. In Dan’s blog post on the Flip vs the Zi6 he stated that the picture quality of the Kodak camera simply wasn’t up to snuff, especially in low light conditions. He also complained about stability and audio recording performance.

This past week Flip came out with a brand new entry in the pocket video space, the Flip Mino HD camera which is their answer to the Zi6. Given Dan and others’ hesitations about the Zi6, it would seem that Flip once again has the upper hand.

Another friend and blogger, Scott McNulty, has posted an excellent side by side video comparison of the Flip Mino HD and Kodak Zi6 pocket cameras. To my eyes and ears, the results are pretty clear – the Zi6 wins hands down. Even from this short test, the Zi6 performs extremely well in all light conditions, even outdoors at night. The Zi6’s image is clearer, has truer color and increased detail than the Flip’s. The image stabilization of both cameras is about equal. As far as audio goes, some people will indeed like the fact that the Flip’s microphone picks up less ambient noise, but it also results in a muffled track that will most likely need to be amplified when edited. Not good.

When you look at the video comparison of the two cameras, and you factor in the Zi6’s increased screen size, it’s ability to take macro shots and its expandable storage capacity via smart media, I think the Zi6 comes out ahead. In addition, one of the complaints against the Zi6 vs the original Flip was that it was more expensive. With the release of the Mino HD, the Flip is once again the more expensive of the two, even when you factor in the rechargeable lithium ion batteries that users like John Lawson say you’ll need for the Zi6. Personally, if you’re recording in HD I’m not sure why you’d want a camera with inferior picture quality anyway, but then again, that just might be me. Thanks to Scott, I’ve finally made my decision and put the Kodak Zi6 on my Christmas wish list. Ho ho ho!

UPDATE: Andy Ihnatko has done his own comparison and interestingly has reached the exact opposite conclusion. He thinks the Mino’s picture is better. He’s on the preverbal “crack”. The Zi6’s image is much sharper, more defined and has better depth of color than the Flip. He does agree that the Zi6’s audio is better, which now there is no doubt about. So apparently if you like washed out images that need level adjustment and audio to match, the Flip is the camera for you. Personally, I’ll be sticking with the Zi6.