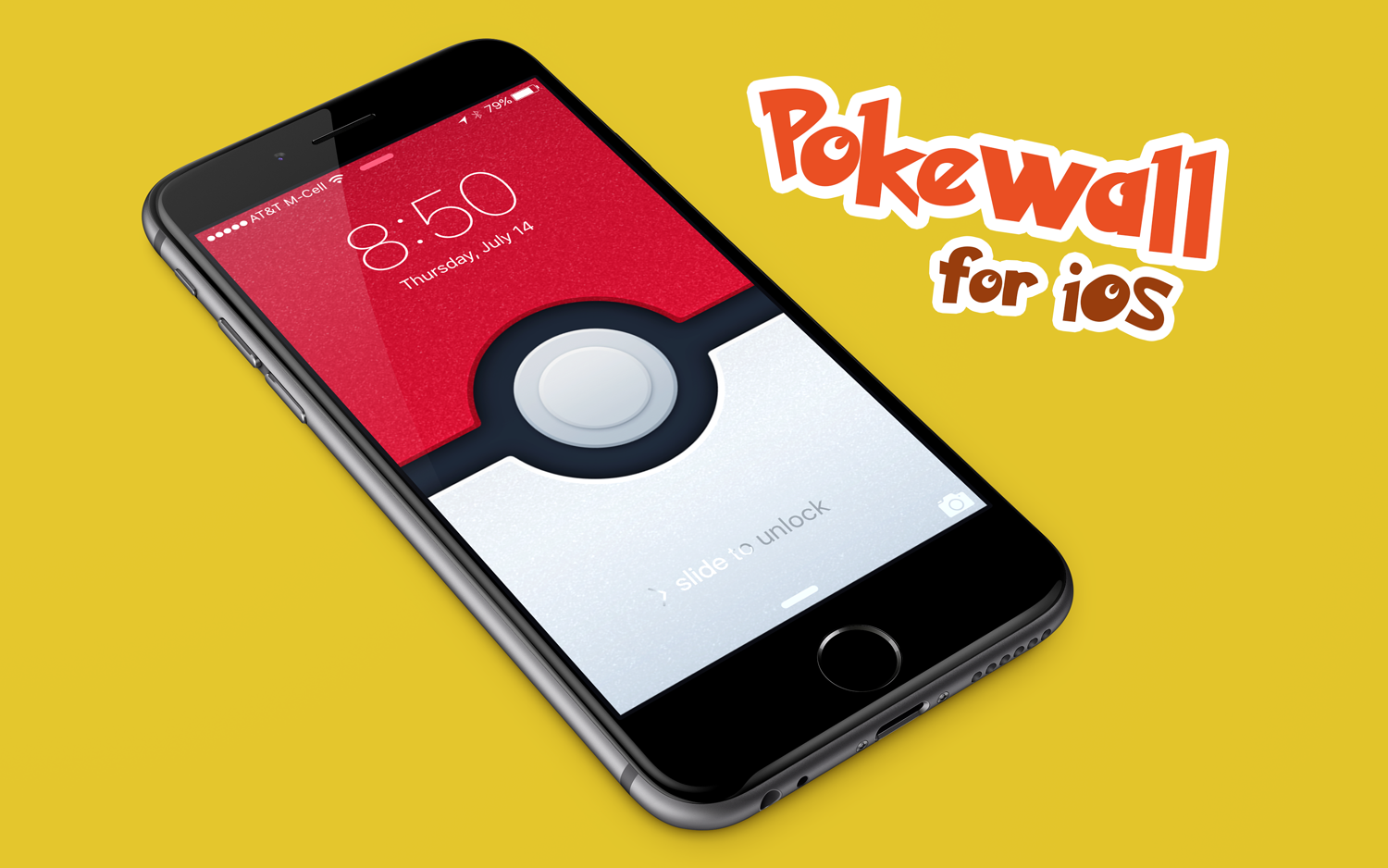 I designed these mobile wallpapers to work specifically with iOS, but there’s nothing that says you can’t use them with Android or Windows phone too. I’m just not going to make a bazillion size variants for all those devices 😛

There’s no denying that the new augmented reality game Pokémon GO from Nintendo and Niantic, Inc. has taken the world by storm. People of all ages are getting their butts up off the couch and heading out into the real world to try and capture as many of these cuddly, courageous animals as they can.

I thought it would be fun to whip up a mobile wallpaper that let’s you turn your smart phone lock screen into a Pokéball, and so Pokéwall was born. Now you can become the envy of all those shiny new friends you’ve made while you explore your community at all hours of the day and night!

That’s it! Sleep/lock your iPhone and the next time you activate it, you can pretend you’re about to catch that elusive epic Pokémon you’ve always wanted. I hope you enjoy this fun treat & help spread the word via Twitter and Facebook. Have fun and stay safe!

PS – If you liked Pokéwall, be sure to check out my Star Trek LCARS wallpapers as well. 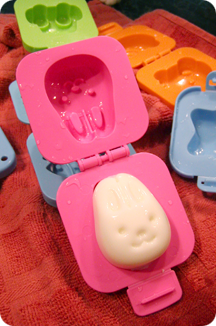 A few months ago I came across a great website called Cooking Cute. The site gives tips and tricks for creating imaginative and beautiful bento box lunches. I’m a big fan of all things Japanese and am fascinated by the level of detail and creativity on display there.

One of the typical ingredients in a Japanese bento box are hard boiled eggs, but not just any old eggs. Cooking Cute shows how to use plastic egg molds to shape your lunch into cute objects like cars, fish and stars. Turns out you can’t get them in the U.S. (at least that I found) and so I turned to eBay and ordered them directly from Japan. Click the image to visit my Flickr page and see how the whole thing turned out.

The process is relatively simple and straight forward. Hard boil some eggs as you normally would, but peel them while they are still hot. This turned out to be the most difficult part. You have to get the eggs into the molds as quickly as possible, while they are still pliable. Be careful not to burn yourself! This part should definitely not be done by children. Next, stuff them into the molds and lock them shut. If there is overflow, don’t worry, you actually want as much egg in the mold as possible. Next, float them in an ice water bath for about 10 minutes to set and cool them. If all goes according to plan, you’ll have a cute bunny where a plain old egg used to be!

Egg molds can be great fun, especially if you have children in the house. It’s a nice project that isn’t nearly as messy as creating Easter Eggs. Just be sure you buy extra large, jumbo eggs. If you don’t, some of the parts of the mold don’t get filled and you’ll end up with failed eggtemps (sorry!). Check eBay for the latest egg molds and then get ready to bring a little slice of Japan into your kitchen. 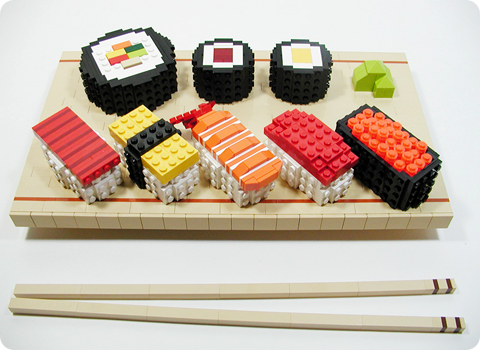 This is the kinda thing you wish you had thought up first. The incredible creation seen here combines two of my very favorite things: LEGOs and sushi! LEGO master “Big Daddy” Nelson says this took him about a day to put together. I just love the detail of the shrimp and the realism of the tray and chop sticks. Click the photo to surf on through to his Flickr page to get a better view. Bravo Big Daddy!

So the lease on my 2005 Honda CRV was up this past July and like millions of other Americans who are dealing with high gas prices, I started looking for a smaller car this time around. Enter the Honda Fit. One of the best selling cars in its class, the Fit seemed just like what I was looking for both in gas mileage and price. I set up an appointment to test drive a Fit and found that I really did like it. Surprisingly it drives much more like my CRV than I expected. I thought I would feel very low to the ground, but I didn’t. And when Honda says the Fit is one of the roomiest cars for its size, they are not kidding. I didn’t feel cramped at all. There’s only one problem – a new model is coming in just a few months.

After a quick bit of research, I’m glad the sales person at Crown Honda didn’t manage to pressure me into walking off the lot with the current model. The 2009 Honda Fit has improvements in almost every area that make waiting worth it. Here’s a list of just some of those improvements:

• Overall length, width and wheelbase have been increased

With all of the focus on gas mileage these days, I was really happy to see that the Fit includes a built-in tire pressure sensor. That small addition should help owners immensely when it comes to getting the most miles from each fill up. The Fit also forgoes the standard addition of a spare tire and includes a tire patch kit instead. By doing so, the car frees up space for other things like those wonderful “magic seats” while also lightening the load, again increasing gas mileage. You gotta give Honda credit, in today’s world every bit helps.

I’ve also noticed some nice things about the new Fit that Honda doesn’t tout, but are none-the-less important to a CRV driver like myself. One of these features is the ability to control the sound system from the steering wheel. I’ve really grown to love this feature in my CRV and every time I climb into my wife’s Civic, I instantly miss it. These controls are absent on the current Fit, but you can see in close-ups of the 2009’s dash, that they are there. Another is the modified gauges including a non-recessed speedometer. I really don’t like the current “sports” look of today’s gauges with deep wells that hold the instrumentation. While the 2009 Fit doesn’t totally remove these recessed gauges, the primary one is once again flat and easy to read which is a big help. Lastly, there is an extra storage well on on the passenger’s side above the glove box and a swing down storage tray between the front seats. Both are obviously lifted from the design of the CRV which is just fantastic.

if I didn’t know better, I’d swear Honda had designed the new 2009 Fit just for me. Of course, there are always downsides to any car and advanced reviews suggest that the car’s pick-up isn’t as good as the current model. This, combined with higher levels of noise at highway speeds seem to dictate an informative test drive is in order before I make my final decision. For now, I’m happy going month-to-month on my current lease and biding my time. Of course, when the new models arrive, they’ll probably be in short supply, so that “autumn” release may eventually turn into a winter purchase. If the 2009 Fit turns out to be 1/2 as good as it looks however, I think I’ll have made the right decision. Wish me luck!

UPDATE: Due to popular demand, Honda decided to release the new Fit a month early. It’s being released to dealers on August 26th so if you’re in the market, prick up your ears people!

This Sunday night at 8pm marks the return of my absolute favorite television show. Ninja Warrior, G4’s ultimate TV competition of determination, athletic prowess and endurance, is back! This incredible game show import from Japan has been taking the U.S. by storm and is known there as Sasuke. The show pits 100 competitors against some of the toughest obstacles you’re ever likely to see in what can only be described as a no holds barred mad dash to stay dry and finish first. What makes Ninja Warrior so great? The show manages to take a simple premise (who can finish the course the quickest) and turn it into 1/2 hour blocks of some of the most compelling human drama you’re ever likely to see.

Without giving too much away, there have been only a handful of competitors who have actually made it all the way to the end to claim the coveted title of “Ninja Warrior”. Now in its 20th season, the show features seasoned veterans, green newbies, TV personalities and even the occasional comic relief thrown in for good measure. Players race, swing, climb and dive through 4 grueling stages to try and obtain Japan’s version of “fortune and glory”. If you’ve not checked out Ninja Warrior yet, do yourself and your TiVo a favor and set a season pass for the all new ninja block starting this weekend on G4. You won’t be disappointed.