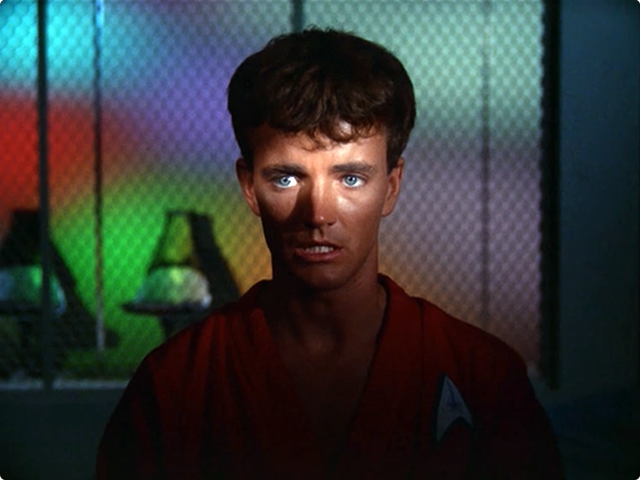 Poor Charles Evans. Stranded on a planet of inter-dimensional aliens since the age of 3, Charlie had no one to teach him the finer social graces. The result is a self-centered teenager with the ability to bend the entire world to his will, kinda like Justin Bieber on psychic steroids. ‘Charlie X’ isn’t one of my favorite episodes of classic Star Trek, but I was surprised how difficult it was to select the one perfect shot. By this time in its production, Star Trek’s visual style had started to be defined. Blocking, lighting and pacing were starting to come together and the result makes ‘Charlie X’ more visually cohesive as a result.

I chose this single shot for a number of reasons, not the least of which is the gorgeous background that frames Charlie’s face, but also because it perfectly illustrates what the episode is all about. The lone teenager, flush with power and hormones, desperate for acceptance, daring Kirk to push him. Charlie gives off a creepy vibe throughout the story and this shot visualizes it to a tee.

Next time we go ‘Where No Man Has Gone Before‘. 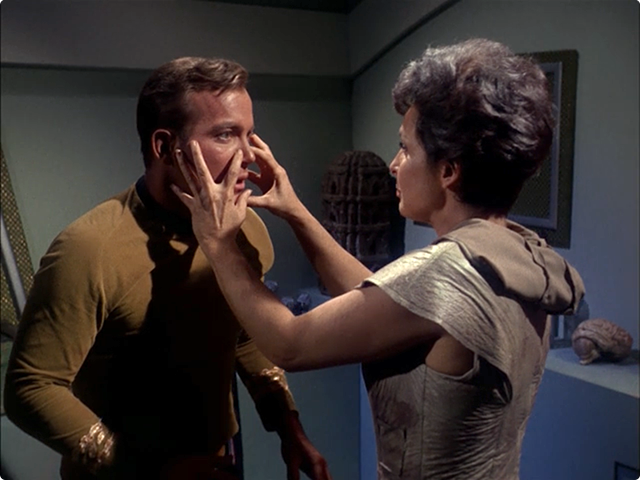 This episode of classic Star Trek always creeped me out as a kid, and with good reason. An alien creature who can assume the appearance of anyone, roaming the halls of the Enterprise in search of its next victim. The original series’ ‘The Man Trap’ oozes with mystery and horror and saves the best bit until the very end when the Nancy Crater, otherwise known as the Salt Vampire, reveals herself to the crew and the audience. Our perfect shot takes place just prior to that bizarre ending as Nancy has tossed Spock aside like a rag doll and has Captain Kirk firmly in her hypnotic gaze.

I always found it a bit of a stretch that Professor Crater could survive for almost two years alone on M-113 with Nancy and not get the salt sucked right out of him. Given how many crew members end up dead, you’d think her appetite was almost insatiable. Then again I guess it’s kinda like fasting for weeks, once you’re surrounded by food after having gone so long with so little, you kinda want to put your big pants on and sail right on into salt-town.

Next up is one of my least-favorite Star Trek episodes – ‘Charlie X‘. This should be interesting. :-/

SPOILER WARNING: This post contains spoilers for AMC’s The Walking Dead. If you’ve not watched the season 4 finale yet, back away from the blog post! I’m about to talk about stuff you probably don’t wanna know. You’ve been warned!

Last night I watched the season 4 finale of one of my favorite shows, AMC’s The Walking Dead and it did not disappoint. The show proved once again why I and other fans still enjoy tuning in week after week. The finale was a perfect blend of tense action, rich character development and satisfying resolutions with just enough un-answered questions to get us to return in October. Despite this, as I read some of the reviews of “A”, it’s apparent some critics feel The Walking Dead is about as exciting as one of its re-animated corpses.

The A.V. Club’s Zack Handlen rated the finale a meh-erific “B+”, lamenting the crucial flashbacks that gave Rick’s extreme cruelness on the dark road that much more bite. These flashbacks work, if for nothing else but to remind us of a time when Rick and Herschel had hope for the future, something that we’re constantly reminded has to be fought for. I enjoyed seeing Herschel again and loved how the flashbacks acted as an important contrast for what the group experiences when they finally reach Terminus.

Meanwhile, over at TV.com, reviewer Tim Surette called the finale a “pretty crummy season-ender” that was anti-climatic and would have served better as the penultimate entry. Personally, I think Tim’s off his apocalyptic rocker. The finale HAD to end with the arrival at Terminus anything less would have been anti-climatic. This was the mistake Game of Thrones made last season by not making The Red Wedding the finale it deserved to be. Critics like Zack and Tim have missed the entire point of S4’s journey not to mention dramatic plot structure and it’s pissing me off. 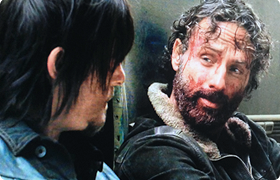 Critics often take stabs at The Walking Dead when the show veers into character studies with “nothing happening” in the zombie department. The thing is however that in order for us to care about what happens to these characters, we need down time with them to learn where they came from and what drives them. Season 4’s mini-stories have been great at letting viewers get inside the heads of characters like Darryl, Carol, Tyreese and Michonne. The Walking Dead’s terrifying moments can’t possibly hold our attention unless we emotionally invest in Rick, Carl, Maggie and the others week after week. One of the ways we invest are through quiet scenes like the one in “A” between Rick and Darryl as they sit against the car. Rick finally tells Darryl that he is his “brother”, something the audience has felt for a long time but Rick’s never come out and said. In this moment, the audience is rewarded in spades because we all know Darryl is far more Rick’s brother than Shane ever was. It was a brilliant and satisfying emotional moment and I loved it.

Other highlights included the foreshadowing of the rabbit snare and the one at Terminus, Michonne and Carl’s “monster” exchange in the forest and Rick “hulking-out” on Joe’s gang, gutting the guy who was about to rape his son. Here we are reminded yet again just what lengths Rick is willing to go to to protect Carl and the others in his “family”. It was a visceral, heart-pounding scene worthy of the finale as was Rick’s parting line “They’re screwing with the wrong people.” When he exclaimed that, I practically jumped from the couch, yelling “F*ck YEAH!“.

One day, The Walking Dead will cease to be exciting. We’ll have had enough of the hopelessness, enough of the roaming hoards eating the characters we love. For some the show seems to have jumped the zombie shark long ago, but for fans like myself, there are lots of stories left to tell, more secrets to be revealed and tons of brains left to eat. As far as I’m concerned, the undead (and the critics) can bite me!

We had been taken such a long break from recording our weekly podcast, that when Jen, Dave, Krystyn and myself finally got together last week to record the latest episode of The Sci-Fi Cast, I had forgotten just how much fun it was. That’s right folks, we’re back at it and have served up a special Halloween episode just in time for Samhain. Episode 13 is now live at a newly improved website and ready for your listening pleasure. We run down our favorite vampire, zombie and slasher flicks and throw in the usual assortment of geeky fun that our nine listeners have come to know and love. Starting next week, we’re going to try a new recording process suggested by Dan Benjamin, one half of the voices behind The Talk Show, to see if we can ratchet up the quality level prior to the start of the new season of Battlestar Galactica. Swing on over and check out Episode 13 or subscribe in iTunes today.