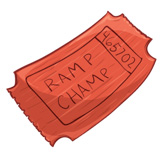 Back when Ramp Champ was released for the iPhone in August of 2009, it was one of only a handful of boardwalk style games in the App Store. Although it had taken much longer to produce than we had initially thought, all of us at the Iconfactory and DS Media Labs were proud of the effort. From its pixel-perfect artwork, and the fantastic original soundtrack to the design of Ramp Champ’s in-app purchases, every part was crafted with love. I wrote back then that the game was a huge risk for us as developers, but no matter what happened, I wouldn’t trade the experience for the world. All of us had tons of fun creating the game and the effort was hugely rewarding. Fans loved the rich graphics and cleverly designed puzzles that brought back memories of arcades and boardwalks long gone.

Shortly after Ramp Champ’s release, Skee-Ball by Freeverse hit the App Store and quickly stole Ramp Champ’s momentum. Skee-Ball was limited in its game play and far less graphically rich than Ramp Champ, but thanks to its straight-forward approach and realistic 3D physics, it became a huge hit. With Skee-Ball’s success, dreams of hitting the top 25 of the App Store quickly faded and although the game held its own, it never rose to the level that we had hoped it would. We produced several new add-on ramp packs for the game, but both the Iconfactory’s and DS’s resources were limited and we each turned our attention to other projects.

With the advent of the iPhone 4’s retina display 4 in June of 2010, Ramp Champ fans clamored for an updated version of the game with new high-resoultion graphics. The problem was that most of the content for the game was produced using raster (bit-mapped) graphics, not scaleable vectors and re-creating the entire game for retina proved cost prohibitive. For a while there was talk of a sequel that would be designed around all new vector graphics, and an internal prototype was even built, but it just wasn’t in the cards. Sometimes it’s difficult for small companies to devote time and money to a project when success is far from assured and such was the case with Ramp Champ. Its future seemed bleak indeed.

Then near the end of 2011, Ben Stahlhood and I started talking about DS Media Labs taking the reins of our favorite gaming son. DS had gone through some restructuring and was hiring fresh new talent to position themselves well for 2012. It’s always tough handing one of your most treasured creations to another to foster, but with Ramp Champ the move made sense. DS had been a fantastic partner in the game’s creation and we knew that if anyone was going to give Ramp Champ a bright future it would be them. With our development efforts focused on xScope, Twitterrific and the upcoming Astronut for iPad, we finalized the arrangement and I’m pleased with the result. I don’t know what’s in store for Ramp Champ any more than you do, but DS’s recent press release promises at least updated retina graphics, and I’m confident there will be much more to come after that.

All of us at the Iconfactory wish Ben and the gang at DS Media Labs all the best in their success. We look forward to rolling balls, knocking down those damn ducks and collecting tickets for even bigger and better prizes when Ramp Champ ultimately gets the update it so badly deserves. Good luck gang!