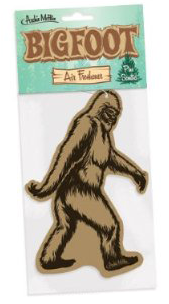 Being the huge Bigfoot freak that I am, I recently went on an expedition of discovery. This sojourn wasn’t to traverse the American Northwest in search of Sasquatch, (I would love to do that someday BTW) but to find the latest and greatest Bigfoot bling. I know there have got to be geeks like myself out there that can’t get enough of the huge, mythic ape-man and so I fired up Google and trekked off into the digital wilderness. If you have a Bigfoot fan in your life, maybe some of these items will come in handy as a future birthday, Christmas or bar mitzvah present.

• Bigfoot Air Freshener – Patterned after the big guy in the famous Patterson-Gimlin film. Personally I think it would have been much cooler to go all authentic and replicate the infamous Bigfoot stench for this one, but I guess the scent of pine trees goes over better with the ladies. [$6.95 via Amazon]

• Bigfoot Garden Yeti Statue – The promotional text for this resin garden statue of the legendary Sasquatch says visitors will do a “double take” it’s so life-like. Yes, because everyone knows Bigfoot isn’t 8-12 feet tall, he’s really just 2. Still, it’s kinda cute. One thing PR dudes, he’s either a Bigfoot OR a Yeti, not both! [ONLY $125 via Design Toscano]

• Bigfoot, the Bashful Yeti Tree Sculpture – Our friends at Design Toscano are at it again, this time with a resin sculpt “Painstakingly hand-painted to make passers-by look twice” that you can hang in your favorite tree. This one looks a bit too “Planet of the Apes” for my tastes but your Bigfoot buddy will probably love it. Probably. [$69.95 via Design Toscano] 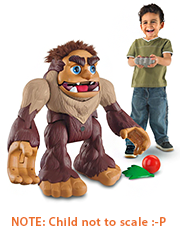 • Fisher-Price Imaginext Big Foot The Monster – What kid wouldn’t want a 14″ animatronic robot of a creature that has been known to break into houses, kill hogs and scare kitty cats to death? This adorable toy may not come with livestock accessories but he can pound his fists, walk forward and back and even does somersaults! [$74.99 via Amazon]

• Sasquatch’s Big, Hairy Drawing Book – How do we market a notepad of 120 almost blank pages to kids and parents? Easy! We’ll slap Sasquatch on the cover and watch the money roll in! Featuring “page after page of off-the-wall gags and fillin doodle prompts” Sasquatch’s Big, Hairy Drawing Book could be the ultimate discovery for that Bigfoot lover in your life, or it could be the biggest fun-time hoax of all time. Your call. [$12.95 via Amazon]

• ‘Gone Sasquatchin’ Gear – Nothing says “Hey, I’m a huge, hairy nerd!” like Animal Planet’s Finding Bigfoot t-shirts, hoodies and baseball caps. If you order within the next 24 hours, they’ll also throw in their Backyard Bigfoot Recipe Book. Perfect for all those redneck BBQ’s down at the ol’ swamp. [Assorted prices via DiscoveryStore.com]

• Patterson-Gimlin Film Site Track Cast – Okay, call off the hunt! If you’re looking for the perfect gift for that Bigfoot fan in your life, it doesn’t get any better than this plaster replica of a Sasquatch track from Bluff Creek. Taken from one of the footprints left at the 1967 Patterson Gimlin film site, it even comes with a certificate of authenticity. I bet it’s even notarized. Seriously, who’s buying me this? [$40 via BigfootSurplus.com]

They say confession is good for the soul, and since I’ve never had any problem with revealing my inner likes and dislikes, I jumped at the chance to join in on the fun of the latest group blog proposed by my friend Dave Caolo. This time around are songs that for one reason or another, you would be embarrassed to admit to liking in mixed company. I must say however that part of the reason I decided to throw my hat in the ring, was that it gave me the excuse to create the image you see above. What do Britney Spears and Bigfoot have in common? Well, read on my friends and find out!

I’m not ashamed to say that I have an entire iTunes playlist devoted exclusively to the perky tunes of those crazy Brady kids from my youth. Back in the 70’s the TV network suits figured the child actors of The Brady Bunch needed to compete with The Partridge Family and the Brady Six was born. Who among us can forget classics like Time to Change or Sunshine Day? Good times. Of all the Brady tracks I have however, Merry Go Round has to be the most sugar-coated piece of hippy jerky in the entire lot, and I love it! For some reason I can listen to Eve Plumb hit off-key notes until the cows come home and I just don’t care. Take a listen, but beware, the song is a total ear worm. Once I hear it, I usually can’t get it out of my head for days.

You Drive Me Crazy

Ah Britney! Back in the day, this familiar teen-pop queen commanded respect and actually worked her ass off to become successful. One day I broke down and bought You Drive Me Crazy for no apparent reason other than it was stuck in my head. To me, all of Britney’s songs sound somewhat the same (beat, rhythm, breathy lyrics), so I only own one… and this is it. I’m kinda ashamed to even have the one track in iTunes, but every time it comes up on random play, I relive a little part of 1999 and think back fondly on what Britney used to be. Ah Britney!

Everyone says they hate the Spice Girls, but I think secretly, everyone really loves them. I find the bulk of their songs incredibly infectious, bubbly and the perfect pick-me-up when I’m down. Their music is like watching a summer popcorn flick – a meaningless plot combined with a pulse-pounding soundtrack and dazzling special effects. It’s not academy award winning material, but it’s still a great time. I mean, how much more fun can it get than this:

If there is a more idealistic, or emotionally manipulative song in this world, I can’t think of one. I first heard America when I was 11, right around the time the classic Saturday morning cartoon School House Rock became popular. I think the SHR connection helps explain why I find this song so darned great. After all, it was SHR that taught me to love catchy songs about history like The Great American Melting Pot and The Preamble. Diamond’s America is like a top 40 School House Rock song on steroids. At least, that’s what I keep telling myself.

Ask any of the guys at the Iconfactory and they’ll tell you I’m obsessed with bigfoot/sasquatch/yeti and have been ever since I was a child. This embarrassing music track is one of my own making since it was impossible to purchase the soundtrack to the movie from which it came – The Legend of Boggy Creek. The song tells the funky tale of the Fouke Monster (bigfoot) and his lonely plight among the other creatures of the swamp. The song, like the movie, is cheesy, low-budget and so bad it’s good. I bust it out every year around Halloween, much to the dismay of my patience-filled wife. And now you know what Britney Spears and Bigfoot have in common – my twisted sense of musical tastes.