MINOR SPOILER WARNING: I don’t talk about specific plot points for these TV shows in this post, but I do outline them in general. As with all of my posts about TV & movies, if you’d rather not be spoiled about ANYTHING, you probably shouldn’t read on.

It’s not a stretch to say the US television landscape is currently experiencing a golden age. Everywhere you look there are quality TV shows to be enjoyed. As television and those who create it have branched out beyond the major networks to cable, Netflix, Hulu and Amazon, competition for viewers has increased dramatically. If the current state of television is any indication, the best way to attract those millions of viewers is with high-quality series that can be consumed any time and anywhere.

There’s so much good TV in fact, that it’s pretty much impossible to watch it all so I thought I might share just four of the great shows I’ve been enjoying lately, why I love them and where you can catch them.

I had heard so much about the CW’s show Arrow, based on the superhero from DC Comics, that I finally just had to check it out. The series follows spoiled billionaire playboy Oliver Queen who, at the start of the show, is missing and presumed dead when his yacht is lost at sea. He returns to his home in Starling City five years later a changed man, determined to clean up Starling as a green-hooded vigilante armed with a bow.

Arrow follows in the footsteps of prior super hero efforts like The WB’s Smallville and although it takes about 10-12 episodes to really find its footing, once it does, it really gets going. By the end of season 1, Arrow is a solid mix of action, gritty drama, geeky comic book fun and more. Stephen Amell plays the lead, Oliver Queen, and thankfully his acting chops have improved considerably since the start of the series. Ollie goes from a spoiled brat who has little emotional range to a complex character we care deeply about. 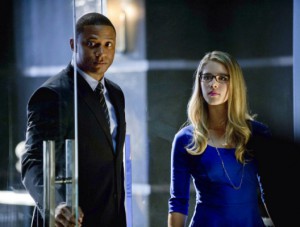 Arrow also has a great ensemble cast including stand outs David Ramsey as John Diggle and Emily Bett Rickards as Ollie’s geeky, computer expert Felicity Smoak. The writers really start to ratchet up the story arc and drama near the end of S2 which culminates in some seriously great TV. Arrow also sets up the backstory for crossovers with another CW property I’ve started watching – The Flash. The two shows take place in the same universe so I’m looking forward to seeing how these two heroes interact in Flash S1 and Arrow S3.

Arrow is a great deal of fun and seems to be building its own personal mythos. As someone who’s knowledge of the DC character Green Arrow came solely from cartoon episodes of the Super Friends, it’s been wonderful learning about Oliver’s origins, his personal mission and his relationships with his friends in Starling City. Arrow also features other costumed heroes and villains I’ve often heard about but never seen on screen until now. The first two seasons of Arrow are both on Netflix streaming, the third season is currently airing on the CW but is also available for purchase on iTunes and Amazon.

For many of you reading this, M*A*S*H is most likely before your time. The show followed a company of army doctors and nurses as they work only a few miles from the Korean War front to save wounded soldiers. Based largely on stories and accounts from actual MASH doctors, the series premiered on CBS on September 17, 1972, and ended 11 seasons later in February of 1983. It was one of the highest-rated television shows ever and its final episode “Goodbye, Farewell and Amen” is still the most-watched episode of television in history with a record-breaking 106 million viewers. 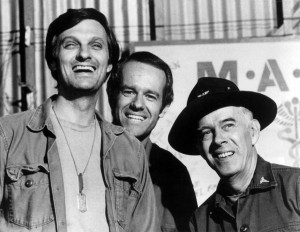 As soon as I heard Netflix streaming picked up the first 5 seasons of M*A*S*H, I instantly added it to my queue. I remember growing up on the show and loved watching the antics of surgeon Hawkeye, played by Alan Alda, BJ, Radar, Potter and the rest of the cast week after week.

If you’re new to M*A*S*H, the first 3 seasons are pretty slapstick and based more on the comedic formula of the 1970 feature film than what would follow. Several of the main characters decided to leave after season 3 including McClean Stevenson as Col. Henry Blake and Wayne Rogers as Trapper John. When they left, the writers (and the actors) who replaced them made a conscious decision to set the new characters apart from the old and the show started taking on more dramatic depth.

Re-watching a classic series like M*A*S*H on Netflix is great because you eventually come upon episodes you’ve never seen before in syndication. Finding them is like unearthing gold, dramatic and comedic nuggets to savor and treasure. I already count watching at least 4 episodes of M*A*S*H I’ve never seen which is remarkable since I was sure I had already seen them all.

A situation comedy like M*A*S*H pre-dates the long-story filled arcs that are common among today’s popular shows, but it more than makes up for it in heart and touching character interactions. I always enjoyed seeing how these brave group of men and women clown, scrounge and save lives in the midst of war. There are great episodes in M*A*S*H that will make you howl with laughter as well as cry like a baby. The key is giving the audience the kinds of characters we care about and can relate to. When the show ended, none of us (myself included) wanted to see them go. Re-watching the series now, it’s very clear why.

For some TV goers, House of Cards may be an acquired taste. The award-winning series from Netflix returns for season 3 on February 27th and fans of the show have been anticipating it’s arrival like an overdue subway train. I got hooked on House of Cards after only a few episodes, largely due to the fantastic performances of the two leads, Kevin Spacey and Robin Wright as Frank and Clarie Underwood. 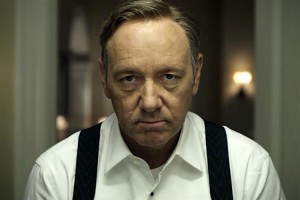 The show features the dark side of Washington politics and the lengths some will go to to seize and hold power. It’s a tight, well-written dramatic series that features some impressive twists and turns and enough political intrigue to keep fans consistently on the edge of their seat week after week.

Unlike Arrow or M*A*S*H, the entire House of Cards run is available for streaming, but only from Netflix. Indeed, House of Cards (and other Netflix series like Orange is the New Black) helped bring the term “binge-watching” into today’s lexicon. Thanks to how the internet is changing the way we watch TV, viewers can now experience the entire 10 ep season of House of Cards in a single sitting. Personally, I like to savor my television, so I usually skip a few days in-between episodes, but your milage may vary.

If you enjoy tense, political maneuvering, well-crafted, realistic characters or just plain good storytelling, House of Cards may be for you. Those who love the show, love it dearly and with good reason. Spacey, Wright and the entire cast is top-notch, the writing is clever and production values (especially the music) are as good or better than any show on network or cable TV. The cliffhangers from S2 have paved the way for what’s yet to come and I can’t wait until Frank finally gets back to breaking the 4th wall once again.

Yes, Archer is a cartoon, and yes, that sometimes means it can be childish and silly but for my money it’s also one of the funniest shows on television. Archer is the brainchild of its creator, Adam Reed, developed for the FX network and follows the exploits of Sterling Archer, master spy and anti-hero. The series premiered in 2009 and features adult humor and dark, sometimes vulgar comedy but that’s really part of what makes Archer so great.

Archer and his co-workers at the organization formerly known as Isis, are a rag-tag bunch of misfits who tout themselves as being skilled in covert surveillance. In reality, the team often causes more harm than they prevent, going from one international incident to the next, toppling governments, trying to overthrow drug lords and even protecting the Pope from assassination attempts. 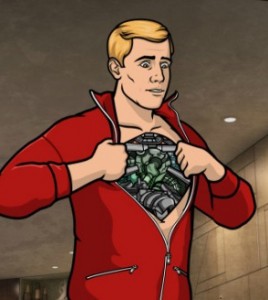 Archer is at his best when he’s facing off against any number of arch-villian spies the series has introduced over it’s 5-season run on FX. I especially love Sterling’s bionic rival, Barry Dylan, who has made Archer’s life a living hell on more than one occasion. Barry showed up again this season, as did a number of other recurring characters which has helped to make season 5 more memorable than the previous “Archer Vice” season 4.

The series features the amazing voice talents of H. Jon Benjamin as Archer, Aisha Tyler as Lana and former SNL cast member Chris Parnell who puts in a hilarious performance as accountant Cyril Figgis. The cast makes an annual appearance at Comicon and often does live episode readings, dishes on their fellow cast members and answer fan questions. I also love the visual style of Archer including the “sets” and the design of the characters themselves, many of whom are patterned on their real-life counterparts.

If you like off-beat comedy combined with a touch of adult humor and fantasy thrown in for good measure, you’ll want to check out Archer on FX. One of the best parts of an animated series is that the characters and show format generally don’t change. When it comes to Sterling and company, that’s just fine with me, they’re hilarious just the way they are.

Other shows I’m currently enjoying or looking forward to returning include Marvel’s Agent Carter & Agents of S.H.I.E.L.D., Game of Thrones, The Walking Dead, The Flash, Big Giant Swords on the Discovery Channel (yes, and it’s awesome!), Face Off, Better Call Saul and WWII in HD on Netflix.

Everywhere you turn there’s just too much good TV to absorb it all. I hope this quick rundown helps give a glimpse into the kinds of TV I love to watch. Maybe there’s something here that appeals to you as well, enjoy!