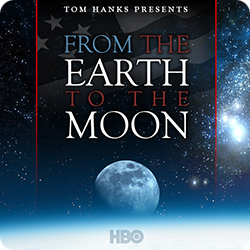 When the award winning mini-series From the Earth to the Moon premiered on HBO in 1998, producers Tom Hanks and Ron Howard were flying high off the recent success of Apollo 13. Not content with simply telling the story of Jim Lovell, John “Jack” Swigert and Fred W. Haise’s near tragic NASA mission, Hanks, Howard and Brian Grazer set about filling in the missing NASA narrative of the agency’s monumental effort to put a man on the moon. The result was a spectacular 12-part series that landed an Emmy Award and Golden Globe for Best TV Mini Series. The show is hailed for its honest account of the Apollo program, ground breaking special effects and soaring musical score by composers Michael Kamen and Mason Daring.

When I first saw From the Earth to the Moon I instantly fell in love with the soundtrack. The opening and closing themes by the late Michael Kamen are full of hope and epic discovery. Individual episodes are chocked full of wonderful 50 & 60’s tunes, especially ep. 4 – 1968 and my personal favorite ep. 5 – Spider about the design and production of the Lunar Module. Kamen was a talented composer and has penned some of the most well-known television and movie themes of recent years including Band of Brothers, Mr. Holland’s Opus and Brazil. Mason Daring’s contributions to From the Earth to the Moon are not as grand in scope as the main themes, but his work on Spider is just wonderful and always makes me mindful of the people who dedicated their lives to building the Apollo spacecraft.

Unfortunately, HBO never released an official soundtrack to the series when it aired, at least not one that contained orchestral themes. There was a half-baked attempt at a soundtrack later, but it consists of mainly pop numbers, many of which never even appeared in the series. I’ve re-watched my copy of From the Earth to the Moon at least a dozen times and each time I did, it made me sad I didn’t have the music from the series at hand. Recently I decided to do something about it by scouring the internet and iTunes to construct my own personal soundtrack. All of the music I’ve chosen is significant to the show in one way or another. I’ve linked to the tracks that are available for purchase on iTunes so you can go buy them yourself if you wish. The rest are downloadable for your personal use. Enjoy them, but I ask you to please not redistribute them on file sharing services.

If you’ve not seen From the Earth to the Moon and love space exploration, history or anything NASA related, I urge you to check it out. Unfortunately the television series is not currently available either on iTunes or Netflix, but signature edition DVD’s are available on Amazon and are well worth the price. Trust me, you’ll enjoy every minute of this epic space adventure. Go, flight!