SPOILER WARNING: This post contains pretty big spoilers for Disney’s animated adventure, Brave. If you don’t want to know key plot points, then you should ride on my friend.

The problem with high expectations is that once you have them, it’s very difficult to let them go. PIXAR has spent almost two decades building up a loyal, praise-filled fan base for their cinematic offerings, and with good reason. For years the studio consistently put out the best animated adventures with masterpieces like Finding Nemo, Toy Story and The Incredibles that pushed the limits of great cinema. Recently however, other studios have come into their own and produced some amazing animated adventures that are just as good, if not better than the best PIXAR has had to offer. Movies like Tangled, How to Train Your Dragon and Despicable Me have proven that PIXAR no longer has a lock on the genre it helped pioneer back in the 1990’s.

Enter their latest film, Brave. The story is a familiar one – oppressed child longs to find her own destiny out from the watchful eye of her overbearing parent. The hero, in this case the flame-haired Merida, resents her mother’s attempts to turn her into a prim and proper future queen and in doing so embarks on an adventure to “change her fate”. As I watched the amazing first act of Brave, the obvious parallels to another classic Disney animated film, The Little Mermaid, quickly became apparent. Like Ariel, Merida is unhappy with her lot in life and longs to be elsewhere. Both characters are strong-willed women of action and they both enlist the help of a magical witch to help them in their quest to alter their destiny. 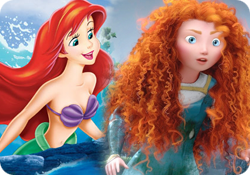 Unfortunately for Brave, that’s where things take a turn for the worse. In seeking the witch’s help, Merida receives a magical pastry that she is to feed, not to herself, but to her mother. It’s obvious that this pie is both powerful and dangerous, having come from a large cauldron of steaming black goo, and yet Merida thinks nothing of sneaking it back home, presenting it on a plate and having her beloved mother swallow it. Now, you may dismiss this as simply a necessary plot point, but the act itself didn’t sit well with me. Our heroine, the person we’ve just spent the entire first act getting to know and love, suddenly feels it’s perfectly okay to possibly poison her mom. Feeding the pastry to Queen Elinor isn’t an act of bravery, it’s one of cowardice. Unlike Ariel, who boldly chooses to take the risk and the danger of Ursala’s life-changing spell onto herself, Merida lays that burden upon the feet of her unsuspecting mother. When the spell first sickens and then changes her mom into a hulking grizzly bear, Merida repeats again and again that it’s “not her fault” – selfish brooding from a character we’re supposed to be rooting for. It is true that by the end of the film Merida regrets what she’s done and would never do such a thing ever again, but she should never have done it in the first place. Any time a character displays a lack of empathy for their loved ones, it makes me like them less.

Other problems in Brave include a meandering second act that basically turns into one long, predictable chase scene, a delightful, originally-written villain we only see once and a seemingly un-motivated change of heart for Queen Elinor, who out of nowhere suddenly decides it’s okay for her daughter to marry out of love instead of tradition. Perhaps the biggest missed opportunity however comes in the form of Merida’s passion and love of archery. Merida is given a bow at an early age and quickly becomes an expert markswoman. She spends her free days riding at break-neck speeds through the glenn, getting off incredible shots on horseback, and bursts into tears when her mother throws her beloved bow in the fire (another wasted opportunity for great character development – we never get to see Elinor give the rescued bow back to her daughter). Given how important archery is to our main character, it is disappointing Merida never gets to use her skills in any truly heroic fashion. The archery contest with the suitors ultimately ends in tears and doesn’t change anything. When Merida uses her bow to catch a fish for her transformed mother, a few seconds later, mom is ankle deep in the river and catching her own dinner. In the climatic finale, it isn’t a skillfully placed arrow that lands the crushing blow to the cursed Mor’du, nor do her shots even slow the animal down. I liken Brave’s ill-use of the bow to that of giving Luke his magical lightsaber and then never letting him duel Darth Vader.

Now here’s the good news. Despite all of these things, Brave is still worth seeing. The visuals are simply stunning. From our firey heroine’s amazing raven locks, to the misty woods inhabited by glowing wisps, the art direction for Brave is incredible. In my eyes, it rivals that of Finding Nemo and Wall•e and alone is worth the price of admission. Also a joy are the realization of the secondary characters like Merida’s father, King Fergus brilliantly played by Billy Connolly, the hilarious Triplets and all of the clansmen who come to compete for the hand of the fair princess. There are many moments in Brave when I laughed out loud or was in sheer awe of the beauty of what was seen on screen. I also enjoyed the Scottish settings and accents which felt surprisingly fresh for a movie of this genre.

Was Disney’s Brave good? Yes. Was it one of their all-time best? No. Is it worth seeing? Definitely yes. Would I see it again in the theater? No. I have to say I’d reach for DVD’s of The Incredibles and Wall•e before Brave, but in the end I can recommend the movie because of its sincere effort to put a fresh new face on the title “Disney Princess”. It’s obviously crafted with blood, sweat tears and love which I appreciate very very much. At the same time I wish Mark Andrews, Brenda Chapman and Steve Purcell (the film’s co-directors) had a clearer vision of the central character. She does things that aren’t worthy of truly great heroes and of all the characters in Brave, changes the least when the story is over. Brave is like an arrow loosed in the heat of the moment, full of promise and anticipation that doesn’t quite fly true. If you enjoy tales of adventure and PIXAR films in general, you’ll most likely love it. I just wished Brave had hit the bullseye.