I live in Greensboro, North Carolina which is located approximately 330 miles from Baltimore Maryland, home of the Baltimore Orioles. I’m so far away from Baltimore in fact that I don’t even receive their local television or radio broadcasts. I don’t know the local sportscasters, the best places to eat or even how to get to Camden Yards. Yet, whenever my beloved Red Sox (or any other team for that matter) plays the Orioles, Major League Baseball blacks out the broadcast for me here in Greensboro. Greensboro. North Carolina.

Since they were first televised in the late 60’s and 70’s, sports such as baseball and football have been subject to broadcast blackout restrictions. Originally designed to get people up off the couch, sell tickets and into the home team’s stadiums, blackouts were designed to help ensure a healthy bottom line for both league owners and those with a stake in local television markets. Stadiums cost millions of dollars to build and back in the day blackouts made sense, but not any longer. In today’s age of interconnectivity, smart phones, place-shifted broadcasts and on-demand programming, fans are fed up with the NFL & MLB’s blackouts. 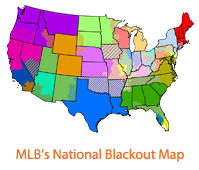 Making matters worse, each league as their own set of rules and restrictions for how blackouts are applied. The NFL’s “75 mile” rule is fairly straight forward. If all tickets of a home game are not sold out, the broadcast is blacked out for a radius of 75 miles from the stadium. Seems reasonable, but given how few games are actually played in a regulation season of football, having even one or two games blacked out is upsetting to die hard fans. In comparison, Major League Baseball’s blackouts are a veritable rat’s nest of regulations that are so convoluted, even team owners don’t understand them. In Las Vegas for example, no less than 6 baseball teams (Dodgers, A’s, Giants, Padres, Angels, and Diamondbacks) are regularly blacked out from television viewing. Sometimes these blackouts aren’t announced until just minutes before the game. If I loved baseball and lived in Las Vegas, I’d probably have a major heart attack about once a week. Thankfully, hope seems to be on the horizon.

Back in February, the Sports Fans Coalition assembled a petition to the Federal Communication Commission outlining fan’s anger at the NFL’s blackout restrictions. Five Democratic Senators joined the petition and urged the FCC to eliminate the rule arguing that taxpayers have helped pay for stadiums and should not have their home games blacked out. They also added it was “a regulatory backstop to an obnoxious and outdated league policy … At a time of persistently high unemployment, sluggish economic growth, and consumer uncertainty, the sports blackout rule supports blatantly anti-fan, anti-consumer behavior by professional sports leagues.” Well said.

This perspective is especially true today since the bulk of sports revenue now comes not from tickets, but from internet and television. Given this reality, it’s difficult to justify withholding broadcasts from fans willing to pay for it. The petition is now a matter of record and a final decision regarding NFL blackouts is expected soon. One hopeful byproduct of the petition is that the F.C.C. may require Major League Baseball to finally document and explain it’s own complex rules for applying blackout restrictions, something fans and owners have asked for repeatedly. Forcing MLB just to explain the rules may push blackouts over the tipping point and finally put an end to them. 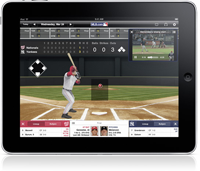 In an age when we can watch our favorite movies and television shows whenever we want, wherever we want (mostly), sports blackouts are a slap in the face of the consumer. Fans have put up with these Orwellian restrictions for years but the increasing popularity of smart phones and tablet computers like the iPad have begun to put enormous pressure on leagues, team owners and even government. Social networking and digital connectivity have made this country, indeed this planet, a very small place where all forms of information can be accessed from anywhere. If the petition filed in February simply forces MLB to explain why I can watch the Red Sox kick the tar out of the Yankees but not the Orioles, I’ll be happy. Personally, I’m hoping the F.C.C. takes the TV blackout rule out back for a trip to the proverbial woodshed. One can dream.

Update: In yet another blow to baseball loving fans everywhere, the U.S. 4th District Court of appeals upheld a ruling preventing Time Warner Cable from offering the Mid-Atlantic Sports Network (MASN) and its sister station, MASN2, from being added to its cable package in North Carolina. The reasoning the government decided to hang fans out to dry? The Orioles and Nationals have been “so bad” in recent years that no one would want to watch their games anyway. Yeah, never mind that occasionally those teams play OTHER teams like the Yankees or Red Sox, or that as I write this the Orioles are sitting in first place in the AL East. MLB Needs a serious kick in the ass.