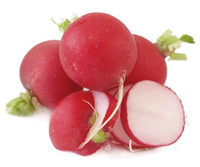 Something’s wrong with the humble radish. When I was a kid I remember these funny little root vegetables burning my face off from just a single bite, but lately I’ve found they have no more kick than a cramped kangaroo. Part of me suspects that the heat of the modern day radish has somehow been bred out of it for a wider appeal to mainstream American consumers. A quick check of Wikipedia reveals that there are no less than 10 common varieties of radishes. The Cherry Belle is the version most often purchased in North American grocery stores. From the taste and smell of them they must be some of the blandest radishes on the block.

I first became addicted to radishes when I was very young. My aunt grew them in her garden and would often give them to me and my cousins to chomp on along with freshly dug carrots. Aunt Lorraine’s radishes were strong enough to put hair on your chest and I loved them to death. I also remember the veggie from the Passover celebrations in my church. Part of the ritual involved eating “bitter herbs” and although radishes were probably not historically accurate, I distinctly remember eating slices of radish on pita bread while listening to Fiddler on the Roof. Come to think of it, I’m not sure why our Catholic parish ever celebrated a Jewish event, but I’m glad we did because that’s where I learned to love radishes.

These days radishes might as well be turnips or potatoes because they have about as much flavor. I’ve searched high and low for radishes with heat and not found any in years. The topic came up at lunch today with the guys from work and David suggested checking out the locally grown radishes of the Piedmont Triad Farmers Market. I’ll be heading there this weekend to do some research and hopefully return home with my hot-headed pearls. If all else fails, you can be sure I’ll be sending away for my own super-hot radish seeds next spring. By hook or by crook, the heat will be on!