Summary: The length of some audio podcasts are increasing at an alarming rate. Podcasters should learn to master the fine art of editing or risk losing large portions of their listening audience. I provide some helpful tips to help them avoid pitfalls and offer some anecdotal evidence on the subject.

Even if you read no further than the above summary, you’ll have a pretty good feel for what this post is about, where it’s going and what will be discussed. Unfortunately, this is more than I can say of many of today’s most popular audio podcasts. I’ve noticed a few alarming habits that podcasters are adopting that have put me, and others like myself, off from listening to their content. By writing about these trends, I hope podcast producers will look at the criticism objectively and perhaps find some room for improvement.

“The most valuable of all talents is that of never using two words when one will do.” ~ Thomas Jefferson

Almost a year ago, I started listening to the excellent Mac-based audio podcast by Leo Laporte and company called MacBreak Weekly. MBW is a “round table” discussion between Leo and a cast of regulars including Merlin Mann, Andy Ihnatko and others. I enjoyed MacBreak Weekly for a long time, until I noticed the length of the broadcast kept creeping up and up. The hosts would often wander off on tangents that often had nothing to do with the subject of the discussion. Leo proudly dubbed these tangents “ratholes” and they even came up with a little musical jingle for the things. They were cute at first, but soon grew annoying. When episode number 70 hit 112 minutes back in December, I had had enough. 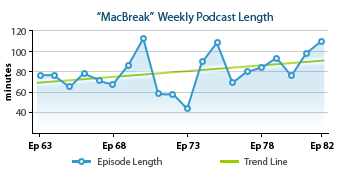 The length of MacBreak Weekly episodes has been rising slowly for some time, and I don’t think they even realize it. I love a good 20 minute discussion about Apple IIc’s as much as the next fanboy, but there are limits. Laporte seems to have forgotten how to edit his podcasts and the result are bloated episodes. In addition, TWiT doesn’t even supply an episode summary until a week after its initial broadcast. Podcaster tip: if you can’t be bothered to listen to your own content and post a detailed summary of what you’ll be talking about for the next 1.5 hours, I can’t be bothered to listen.

“It is my ambition to say in ten sentences what other men say in whole books.” ~ Friedrich Nietzsche

Can I Buy Shares of GRUBR? 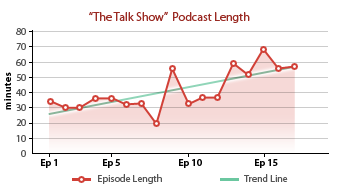 Dan Benjamin says that they typically record 1.5 to 2x as much material as they need and then edit out all the non-essential bits to arrive at their final running time. They don’t set a time limit for The Talk Show, but they do make a conscious effort to bring listeners the interesting bits and leave the rest on the cutting room floor. This being said, I still think set running times are a good idea. Podcaster tip: It’s much easier for someone to plan to listen to a podcast from week to week when its length is fixed. A great example of this is NPR’s Wait, Wait, Don’t Tell Me. Each episode is 47 minutes long and so I know exactly where I’ll be when it starts, and when it ends. If you can’t say what you have to say in a set time, consider editing it down or breaking it up into parts.

“If you bring that sentence in for a fitting, I can have it shortened by Wednesday.” ~ Hawkeye Pierce, M*A*S*H 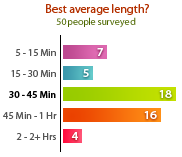 So how long should your average audio podcast be? Not surprisingly if you ask a podcast producer they’ll probably tell you “As long as it needs to be.” Unfortunately this attitude often reflects the desires of the creator and not those of the audience. People’s time is limited and in this modern age, attention spans wane. I took an informal survey on Twitter to ask people their thoughts about what was the right length for an audio podcast. Fifty people responded and took the poll. Although the tally can’t be considered scientific by any sense of the word, I believe the results are indicative of your average content consumer. Is it really any wonder that people’s preferred length for a podcast is the same as your average television show? Podcaster tip: When podcasts approach the length of feature films, people start to lose interest. It’s better to break long epics up into short, multiple features.

Another portion of the Twitter poll asked respondents where they listen to podcasts the most. A full 46% of them said “On the go” meaning in their cars, while jogging, riding the subway, etc. Sometimes I load up my iPhone with episodes of The Talk Show and listen to them on my morning drive of about 15 minutes. Until the recent spike in length, I was able to get through one episode of TTS in a single day’s commute, which was just perfect. Indeed, the 2005 U.S. census reported that the average American’s commute time to and from work was 25 minutes. Large cities like New York were a bit higher at 38 minutes, but all were under an hour. I think this fact helps explain the audience’s desire for 30-45 minute podcasts. By nature, people love closure and enjoying a podcast that can be completed in a single commute is a satisfying experience.

“Let me explain. No, there is too much, let me sum up.” ~ Inigo Montoya, The Princess Bride

Despite what the creators of podcasts may think, their audience is looking for manageable chunks of auditory content that can be neatly parsed into a daily commute or a walk around the park. Thanks in part to the ever increasing HD sizes of iPods, podcast producers no longer feel restricted by file size, and have a tendency to let their hosts ramble. Unless content creators re-dedicate themselves to producing top-notch, edited podcasts, more and more people will undoubtedly lose interest. When I visit the latest episode of MacBreak Weekly and I spy a running time of 1 hour and 42 minutes, it turns me off. The length is too intimidating to even attempt and I just surf away. From one Mac fan to another, I urge Leo and others like him to take the words of Baltasar Gracian to heart – “Good things, when short, are twice as good.”


Hat tip to Craig for his help with the graphing portion of this post. Me bad with spreadsheets. Craig good.